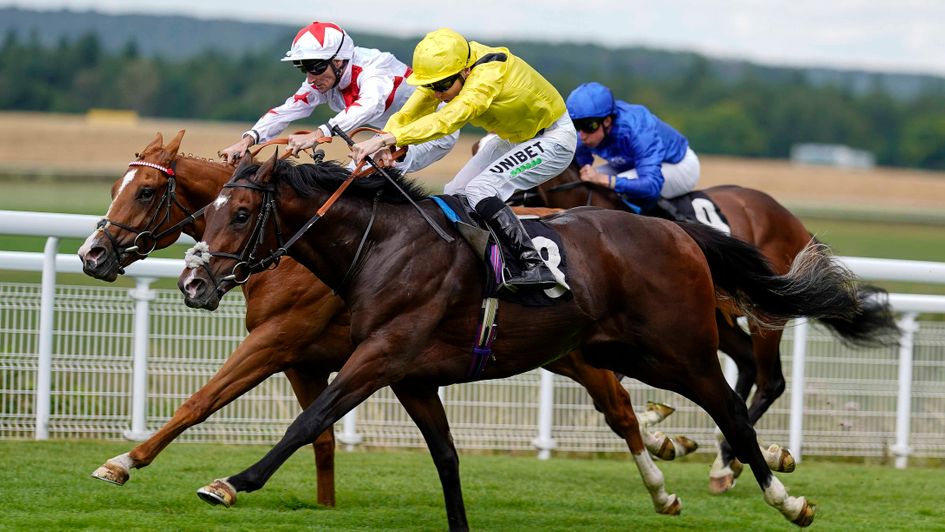 Doncaster next possible port of call for Holloway Boy

Holloway Boy could head for the Champagne Stakes at Doncaster after proving his surprise Royal Ascot success was no fluke with a narrow defeat at Glorious Goodwood.

By trainer Karl Burke’s own admission, the Ulysses colt was considered little more than a social runner when making his racecourse debut in the Chesham Stakes at the summer showpiece meeting in Berkshire.

But Holloway Boy belied odds of 40/1 when coming from last to first to secure Listed honours and he was a warm order to double his tally in last week’s Group Two Vintage Stakes.

Favourite backers ultimately had their fingers burnt, with Burke’s charge mowed down late by Marbaan, but the Leyburn handler feels there are viable excuses.

Burke said: “He tore a shoe off which wouldn’t have helped, that’s for sure, and then he got hampered a little bit after a couple of furlongs and Danny (Tudhope) had to change tactics.

“Because we changed position after getting hampered he hit the front a bit too soon as well, so all in all I think it was a very good run.

“He’s in the Champagne Stakes at Doncaster. He definitely won’t run before then and that will probably be his next stop.

“A lot of people were calling his Royal Ascot win a bit of fluke. I know the form has been a bit mixed coming out of the race, but one thing is for sure, they don’t all run badly.

“He improved a lot from that, it was a lot better performance at Goodwood and I’m sure he’ll improve again.”

Burke also revealed the Lowther Stakes at York is now the most likely next stop for his other Royal Ascot winner, Dramatised.

The daughter of Showcasing was a brilliant winner of the Queen Mary in June and connections initially suggested a step up to Group One level in the Prix Morny could be on the agenda.

But while a trip to Deauville is not being ruled out, Burke is currently in favour of keeping her on home soil at the Ebor Festival.

“She was entered for the Morny on Wednesday, so we’ll have a look at the entries and go from there,” the trainer added.

“Originally the Morny was favourite and I think we’re leaning more towards the Lowther now, but we’ll keep all our options open. I think she’s still second-favourite for the Nunthorpe, but that is probably the least preferred option at this stage.

“With all the travel problems, it’s not as easy and straightforward taking them to France as it was and it just depends what turns up for the Morny more than anything.

“She’ll be left in all of them and it will be a late-ish decision. The main thing is she’s fit and well.”