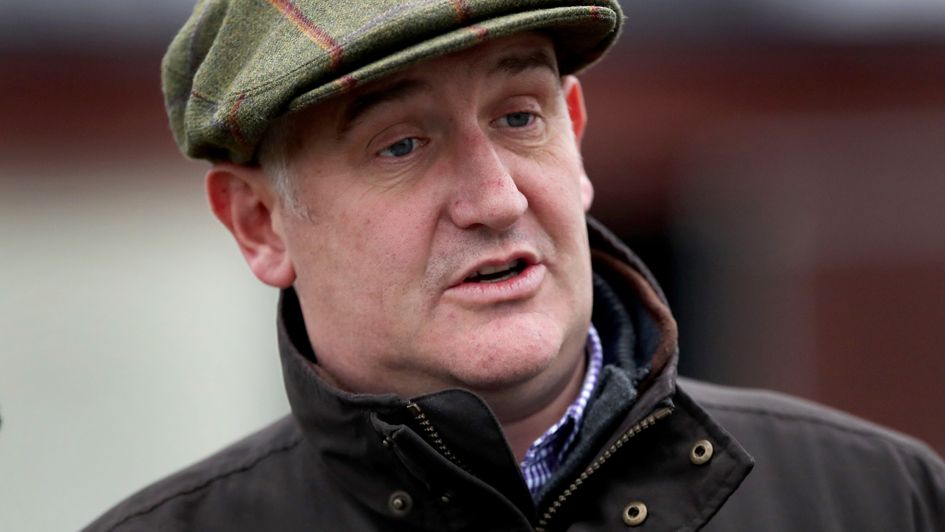 Donald McCain continued his fine start to the jumps season with an across-the-card 143/1 four-timer on Thursday.

The Cholmondeley handler sits in third place in the trainers’ championship behind Fergal O’Brien and Paul Nicholls on prize-money.

“It’s been a great day’s work. Everyone has been working their socks off. It’s hard work at the moment, but I’ve got a great team at home and days like this are good,” said McCain.

“It’s just grand. Everyone’s working very hard and it’s always easier to get up in the morning when things are going well.”

Rest of the action from Carlisle...

Trainer Ewan Whillans has revealed that he’s eyeing up a tilt at some notable races this winter with his big guns, after watching Arvico Bleu (25/1) record a fourth success of his fledging training career.

It’s been less than two months since the 36 year old took over at his Hawick base from father Alastair but it hasn’t taken long for him to hit the ground running, causing a surprise here with the ex-Henry de Bromhead-trained gelding - who belied his odds to seal an eased down four length success under Callum Bewley in the 32West PR And Social Media Agency Novices' Limited Handicap Chase.

Speaking after the race, Whillans revealed that he was enjoying life since taking over the reins. He said: “It’s good to get going as Covid sort of put a stop to things, but I’m living on site now which makes a big difference and I’ve done all of my modules, so I’m enjoying it.

“That was a little bit of a surprise as I thought he’d need the run to be honest. He had a little bit of time off before the sale and we’ve not done much in the way of work with him so far, but I knew the track and the ground would suit so I’m over the moon with him.

“We got him at the sales and there’s not a lot of two mile chases at this end of the country and although he’s nine I felt we could get a good two years out of him. We’ve got Cracking Destiny too and every time he runs he picks up some prize money, touch wood.”

Cracking Destiny provided Whillans with a winner with his first ever runner and he revealed that he was eyeing up a tilt at the Grade Two Monet’s Garden Old Roan Chase at Aintree (Sunday October 24) next for the nine year old, who finished a solid fourth at Kelso behind the Ann Hamilton-trained Nuts Well on his most recent outing.

He said: “Cracking Destiny has been in good heart and we might go to the Old Roan at Aintree, though if Nuts Well runs he’ll be about 5lbs out of the handicap.

“We’ve also picked up Hold The Note and we probably won’t see him until December time, but it’s nice to have some Saturday horses in the yard. We’ve not made a plan for him yet but it would be nice to aim for Ayr and the Scottish National and perhaps Cheltenham but we will just have to see how things go.”

It proved to be an interesting afternoon of action at Carlisle as Jump racing returned to the Cumbria track and winners on the day included the Jonjo O’Neill-trained Quartz Du Rheu (8/11 Favourite), who justified favouritism when picking up a third victory of the season over fences in the Moynan Smith Accountants Handicap Chase over an extended three miles.

And winning jockey Jonjo O’Neill Jr feels that the six year old has earned his shot at a higher grade. He said: “He’s a grand horse and found it a little bit tough when he came over, but I think stepping up to three miles has been the making of him.

“It was a trappy race today and obviously with Brian (Hughes) in front you can’t leave him in front too much but he’s really got his act together and jumped very well today. I think he probably enjoyed the ground today and we’re delighted with him, to get three wins out of him is great.

“I’m not sure where he could head next, but he has the right to go into a more competitive handicap now – I’ll leave it to the boss!”

The closing race on the card was the Visit racingtv.com Open National Hunt Flat Race, which saw young jockey Ben Brackbury hold off Brian Hughes in a thrilling finish to record just a second winner of his fledging career on the Alex Hales-trained Feel Like De Baune (17/2).

The five year old has been bought for Brackenbury to hone his skills and showed the benefit of his two previous runs when knuckling down well in the finish under his rider, holding off the attentions of debutant Stroll On By to win by a nose.

And winning trainer Alex Hales was thrilled for winning connections. He said: “It’s nice when a plan comes together! We bought the horse for Ben to ride, sadly they had a good bumper horse last year called Sun Rising Hill who we lost, so we bought this lad and it’s worked out well.

“He’s stepped forward each time and he’s a big galloper, so we wanted to come to a stiff track like this. It worked a treat and I’m just delighted for Ben and the owners, they’ve put a lot in and it’s his dream. It’s what he wants to do and we’re making it come true.”