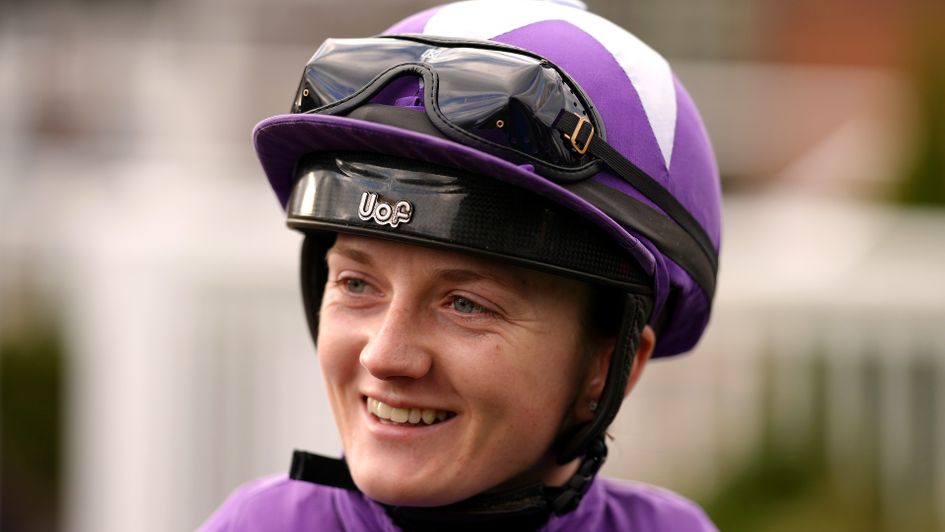 Hollie Doyle: Won a Group Three in France on Tempus

Archie Watson’s Tempus brought up a hat-trick to lead home a British-trained one-two in the Barriere Prix Quincey at Deauville on Sunday.

Sent off favourite for the one-mile Group Three, the six-year-old continued his fine recent form in style.

Hollie Doyle shadowed the French-trained leaders In Crowd and Longvillers for the first half of the race, but was always travelling comfortably aboard the gelded son of Kingman.

The duo put the race to bed in a matter of strides once Tempus saw some daylight, galloping clear to score by almost two lengths.

Jane Chapple-Hyam’s International Angel was held up in rear before making smooth progress through the field to become Tempus’ biggest danger, but she ultimately proved no match for the winner and had to settle for the silver medal.

“He’s a lot straighter when he comes under pressure these days and after jumping OK, the further he went the better he travelled,” said Doyle of the winner.

“It’s hard to tell how good he is as he’s gone from handicaps to winning two Group Threes in eight weeks.

“I know Archie has big plans for him, and if he keeps settled there’s no reason why he should go further. He could also handle a step up to Group Two and I think he’s most effective on a straight mile.”

Andre Fabre’s Botanik is likely to get his passport stamped in the near future having continued his progression by landing the Lucien Barriere Grand Prix de Deauville on Sunday.

One of Japan’s Prix de l’Arc de Triomphe hopefuls Stay Foolish was sent forward by Cristian Demuro and led the select quintet for the majority of the 12-furlong Group Two, but it was the Mickael Barzalona-ridden winner who was always in the ideal place to mount a challenge and eased to the front to score with a bit to spare in the closing stages.

It was the Godolphin gelding’s fourth success of the season and the perfect way to build on his Group Three victory over track and trip earlier in the month. He was three-quarters of a length clear of Glycon on that occasion, but extended that advantage to nearly seven lengths in this contest.

“I was happy to get a lead from the Japanese horse and my horse came with an easy run,” said Barzalona.

“He ran a great race and showed plenty of class. Anything is possible for him as he stays so well. I’m sure he will travel to run outside France.”

Bouttemont ran out a narrow winner of the Barriere Prix de Meautry for Gregory Benoist and Yann Barberot.

Winner of the All-Weather Sprint Championships at Newcastle in April, Bouttemont held off Loubeisien by a neck in a thrilling finish.

Owner Phillippe Allaire said: “I am delighted with the performance. It should act as a perfect prep for the Prix du Petit Couvert (at ParisLongchamp on September 11).”