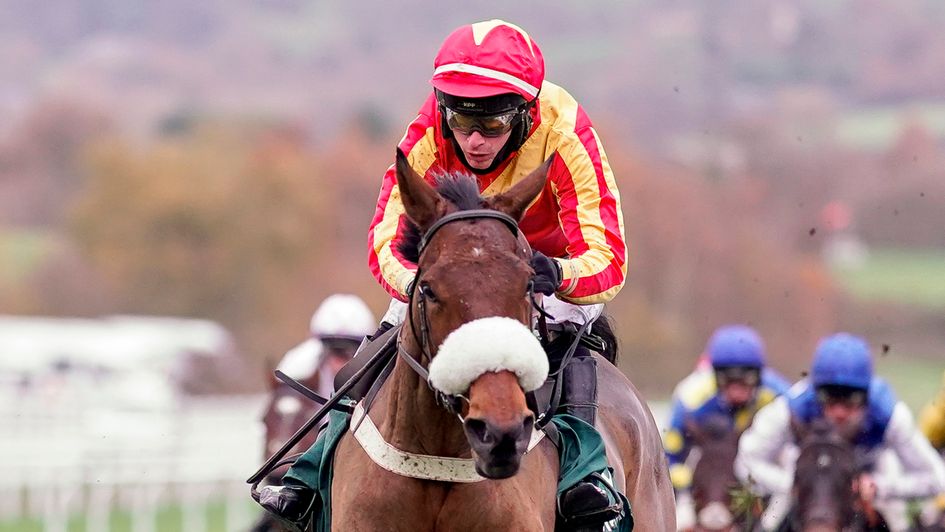 Melbourne, Keeneland and now Cheltenham: be it flat or jumps, the dominance of the extended O’Brien family just spreads.

After the recent international antics of Joseph O’Brien, victorious in a second Melbourne Cup in four stagings with Twilight Payment, and those of his father Aidan, who sent Order Of Australia from Ireland to Kentucky to lead a 1-2-3 in the Breeders’ Cup Mile, their jump jockey-cousin-dash-nephew Tomas swung onto centre stage.

Riding in owner Wayne Clifford’s brightly-coloured red and yellow silks, Tom O’Brien lifted the autumnal gloom of Cheltenham, made even greyer by the Covid19-enforced empty stands, when guiding Coole Cody, trained by Evan Williams, to a dramatic, never-say-die success in the Grade 3 Paddy Power Gold Cup.

They led much of the way, overcoming the attention of the riderless Siruh Du Lac, a first-fence departure, and some breathless jumping of their own, to see off allcomers in a high quality version of the prestigious handicap chase.

Less well known than those close relations, and number two jockey behind Richard Johnson with the powerful string of trainer Philip Hobbs, and indeed elsewhere, there’s always a slight impression that 33-year-old O’Brien, tipped as a future champion jockey when partnering 105 winners in the 2006/07 campaign, operates in the shadow of others, a feeling only accentuated by a quietly diligent demeanour.

But this was certainly his day.

“Brilliant, I’m delighted,” said O’Brien, riding only his ninth winner of the season.

“It’s at the right time – I have gone a little quiet on numbers, and it definitely puts me back in the limelight, and I can try to kick on from here.

“I was aiming to take a lead off David Pipe’s and Tom Scudamore’s horse [Siruh Du Lac] but he obviously went at the first and left me out in front. We got into a good rhythm, bar slipping after the third, and I enjoyed every second of it.

“Since the horse joined Evan [from trainer Michael Blake] he has really taken off; Evan phoned me this morning, and he really fancied him, and said ‘If we get this right, he’ll run a race’ and he did – I do feel for Wedgey [Williams’ first-choice jockey Adam Wedge, absent with a broken collarbone] but he has lots to look forward to with this one.”

Over the last two decades, Vale of Glamorgan-based Williams has won many significant prizes with runners like State Of Play, Deep Purple, Court Minstrel and Silver Streak, but he and his team have also endured their fair share of near-misses, including finishing fifth, runner’s-up and third places in this prize between 2014 and 2016 with Buywise.

“These are very hard races to win, ” he said, “but if you keep trying, you’ll get there in the end.”

During my time following the full-time farmer-turned full-time trainer, he’s been at the forefront of South Wales growing into the mini horseracing powerhouse that it now is, and has become one of the sport’s most respected and engaging characters.

He said: “It was a bit rough and ready out there, but it’s not a beauty contest, is it? He nearly fell in front of the stands [but] it probably woke him up a bit – he can be a funny old horse at times, and if he could do things the hard way all the time, he would always choose the hard way.

“If he could go into a pub and have a fight, he would prefer to do that than go off happy and sit in front of the fire with his slippers on.

“I don’t know where we go from here, but he’s just won a Paddy Power Gold Cup so I cannot ask for more than that.”

Though a winning Irish point-to-pointer, the nine-year-old Coole Cody has done most of his racing over hurdles and this was only his sixth steeplechase so there’s every likelihood of more to come in the future, something which should speed up Adam Wedge’s recovery.

Second, not beaten far in a Cheltenham handicap chase for the sixth time was Spiritofthegames – his time will come – while the heavily-backed Al Dancer (3rd) wasn’t quite good enough, and well-touted Simply The Betts kept on having lost a previously prominent position.

This was another day to be called O’Brien.