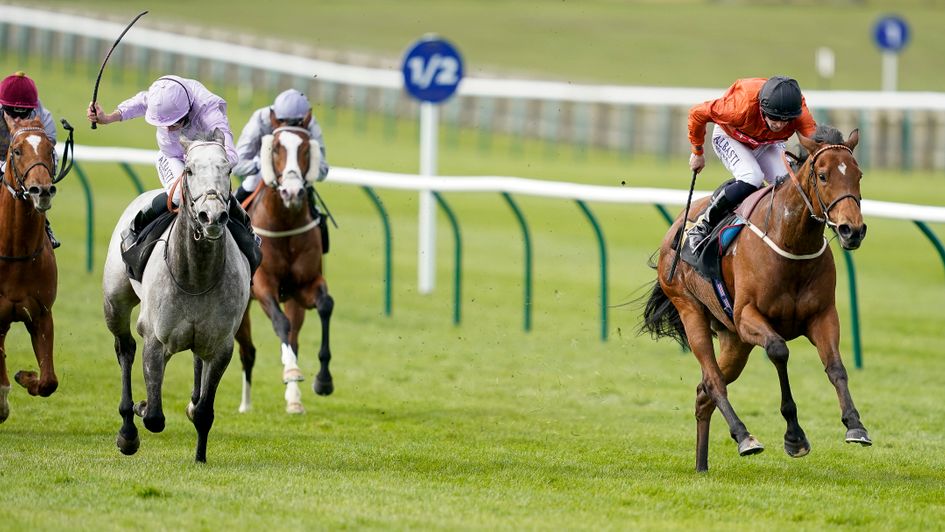 Chris Wall has no regrets about missing Sunday’s Prix Maurice de Gheest at Deauville and saving Double Or Bubble for the BetVictor Hungerford Stakes.

A close-up fifth to Alcohol Free in the July Cup, Double Or Bubble is set to tackle Saturday’s Group Two feature at Newbury.

Highfield Princess, who beat Wall’s five-year-old by a neck at Chelmsford last summer, led home Minzaal and Garrus in the Group One feature in France, rivals whose form ties in closely with Double Or Bubble.

Wall feels her form, which included a fine run behind Naval Crown in the Platinum Jubilee at Royal Ascot, will serve her well at the Berkshire track.

“We are moving her back up to seven furlongs, having campaigned her at six so far this year,” said Wall. “We have sort of run out of six-furlong races at the moment.

“Having won at Listed level and at Group Three, we would like to try to show a bit of form at Group Two so it looks good on her CV, and this looks a good slot, timing-wise, to have a go at it. So, all being well, the Hungerford is the plan.

“Her form ties in quite well with Highfield Princess, Minzaal and Garrus, who were all prominent in the Prix Maurice de Gheest yesterday, so as things stack up, she will certainly be in the mix, all being well.”

Asked if he had any regrets about missing Deauville, he added: “It is all very complicated going to France at the moment. You have to plan these things a very long way out these days.

“I know it is only one week but with this filly, the more time you can give her between races, the better. She is a filly who runs quite well when she is on the fresh side.

“Part of my thinking is that you have three Group Two seven-furlong races that all come up in rapid succession and the Hungerford Stakes might be the one.

“While you don’t like to say it, because it will be hard enough to do something in it, a lot of the better ones might be waiting for York next week.”

With little sign of any rain until Sunday and temperatures set to rise above 30C again in the south of England, Wall is hoping the forecast hot spell continues.

“She likes the ground on the quick side and the way the weather is going you hope you’ll get that, but you do worry that the weather could break down towards the end of the week with thunderstorms and such,” he added.

Double Or Bubble is one of 12 entries for the Hungerford, with the Charlie Hills-trained Pogo the highest rated after winning two Group Threes and finishing second in the Lennox Stakes in his last three runs.

Richard Hannon’s Chindit, Run To Freedom for Henry Candy and the Andrew Balding-trained Happy Power are also among the leading lights.