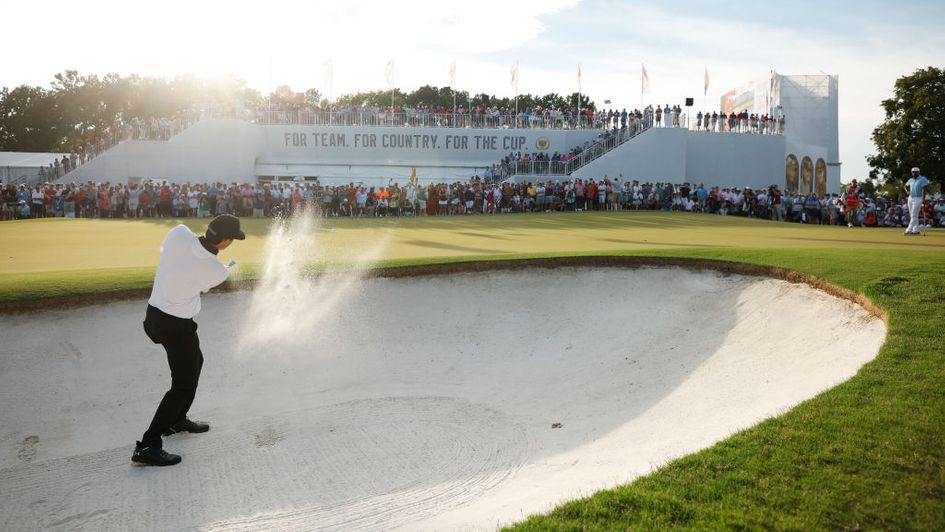 Can the Internationals fight back on day two?

Ben Coley previews Friday's four-balls at the Presidents Cup and fancies the Internationals to enjoy a better second session than they did first.

3pts Kisner and Young to win their four-ball at evens (Paddy Power, Betfair)

Jordan Spieth extended his Presidents Cup foursomes record to 6-0-0 yesterday, with a couple of moments of magic helping him and Justin Thomas to secure their point on the 17th green. It was a good if unspectacular display in which Spieth looked a little shaky off the tee at times, and no doubt fortune was on the side of the United States pairing.

Now it's time for Thomas to try to extend an unblemished record in this event, as he's won all four of his four-ball matches to date. He too looked just slightly off, albeit still hitting a handful of quality approach shots at a course he loves. They didn't look unbeatable, anyway, and a combination of good bounces and poor putting from their opponents tipped a close match in their favour.

The Internationals therefore might feel they've a chance here if Adam Scott turns up. He was abysmal on Thursday, teeing off on the odd-numbered holes and hitting his drives exclusively into bunkers, the rough, or water. Poor putting and mediocre iron play made it a day to forget having been handed a big responsibility against a juggernaut US side.

His four-balls record shows just four wins from 17 so positives where the International talisman are concerned are not easy to find. In fact the only one worth mentioning, and that may be a stretch, is that after he and Hideki Matsuyama lost their foursomes match in 2015, Scott teamed up with an Australian the next day and fought hard for half a point.

More is needed here and, already, much rests on the shoulders of rookie Cam Davis. Just as he'd promised, the quietly assured youngster dazzled on debut, hitting a wedge to take the lead and a drive off 18 to secure the point. He'd been excellent off the tee for most of the round and made a clutch putt on 10 to ensure he and Si Woo Kim didn't fall three down with eight to play, too. It was an outstanding performance in the circumstances.

At north of 2/1, it's tempting to side with the confidence of Davis and hope Scott shows up. Truth be told though I'd rather have seen the fiery Kim come out again with Davis here, which is a damning indictment of how poorly Scott played on Thursday. Unless he improves, Davis won't be able to take down these two on his own.

Scottie Scheffler is a phlegmatic character who was still all smiles on Thursday night, knowing that the team had done its job even if he and Sam Burns had not. They surrendered the lead against Davis and Kim having been two up with four to play, which is not what you'd expect of a world number one and his top-class partner.

Perhaps that'll help them to come out firing and in fairness, the standards they produced would've likely won a couple of the other matches. Still, there remain concerns about Burns' driving, which ultimately ended the match on 18, although it should be said Scheffler answered his biggest question with a good day on the greens.

Ultimately I'm hopeful Sungjae Im can guide his side to a point here. He played plenty of good stuff and things could've been different had he, and particularly Corey Conners, made a couple of clutch putts down the stretch. I remain of the view that Im is the most reliable proposition on the Internationals' side and expect him to play well.

Sebastian Munoz is harder to have confidence in and the odds look a fair reflection of this match, which may rest on Scheffler versus Im. The latter has to produce and remain unbeaten in four-balls.

I was a little surprised to see Cameron Young sent out again, despite a fabulous end to his debut which saw him roll in a long putt for a point. By his own admission, he was largely second best to Collin Morikawa as the pair produced the best score on day one, although it's equally fair to suggest he was still one of the better US performers. He should make a strong four-ball proposition.

Kevin Kisner won his four-ball alongside Phil Mickelson in 2017 and has course form. He hasn't been at his best this year, however, so I'm not totally sold on him in general, despite his credentials in match play. That being said he'll relish having a big-hitting partner to rely on and the draw appears to have been very kind.

Mito Pereira played some good stuff as he and Taylor Pendrith battled their way to a narrow defeat, but both his drive off the 18th tee and his bunker shot were poor. That blow and an absence of form coming in made him a likely candidate to be benched and I'm surprised that he's favoured over both KH Lee and Si Woo Kim.

He's also a pretty meek character and it's hard to get excited about him and Christiaan Bezuidenhout, a Kisner-like player who has a quiet determination and has battled the odds all his life, but faces a very difficult introduction. I like Bezuidenhout but he can't win this match on his own and the combination of Young's ball-striking and the odd 20-foot putt from Kisner is going to be hard to topple.

At evens, they're the bet of the day whatever small concerns I have about Kisner. They ought to be a good bit shorter than that.

This Xander Schauffele-Patrick Cantlay partnership isn't going anywhere, is it. They must feel borderline unbeatable right now and that's because they have been, adding a thumping, 6&5 win over the two most decorated International players to their list of accomplishments. It'll be interesting to see if they're separated as they were, to many people's surprise, at Whistling Straits last year.

Having been four-under through 13 holes in alternate shot, they were the undoubted stars of the opening day and the only possible chink in their armour is the fact they lost both four-balls at Royal Melbourne. Given that they didn't play the format at the Ryder Cup, the one blessing for Hideki Matsuyama and Tom Kim is that they're not facing them in foursomes.

Kim played well bar a poor approach to the 11th, and along with KH Lee was maybe a little unfortunate to lose. They were two-under for their 17 holes, better than three US teams but not the one they faced. Losing the match to a 25-foot putt was no less cruel and he should not be marked down for what was an excellent debut in all ways bar the result.

Matsuyama was definitely hamstrung by Scott, forced to play out of the rough all day yet hitting several quality approaches nonetheless. He'll probably need to drive the ball a little better himself but I don't think he's far away and his record in four-balls is far superior to his record in foursomes.

Given that contrast between him and the USA pairing's record across formats, and the impression Kim made, I'm willing to chance them at 2/1 with Betfair, Paddy Power and Betfred.

Billy Horschel finally turns out for the USA and he'll be eager, perhaps too eager, to make the most of this overdue opportunity. Like Cam Young yesterday, he can hardly have asked for a nicer way to make his entrance: the USA are already in full control, his partner is a lovely man, and the Canadians opposite can both be fancied to miss chance upon chance.

That was the way for both Corey Conners and Taylor Pendrith yesterday and their weakness, while probably overstated, is hard to escape. Pendrith could've secured his side half a point on the 18th green but missed the hole from 10 feet and while it wasn't a terrible putting day after he dropped in a nice one on 16, it's uncontroversial to say these two are not ones to trust over short putts.

They're better ball-strikers than their opponents, though, and Pendrith drove the ball wonderfully at times. After a nightmare start he does deserve credit for fighting to the line and both he and Conners ought to feel they did themselves justice without reward. Close friends, they'll be itching to have a crack at a beatable US pairing by the time their tee-off comes around.

Homa made a nice debut as we'd all have expected and his drive down the 18th was excellent. Still, his approach play wasn't great and while this is a nice way to begin for Horschel, you could also argue that this Canadian duo will feel this is a match they should be winning. I'm not sure I can split them so a small bet on the tie will do, with the shared session also added to the staking plan.

The Internationals fought back well on Thursday, with little reward, but could do better here. I quite like how the draw has played out for the most part and four-balls is a better format for them.