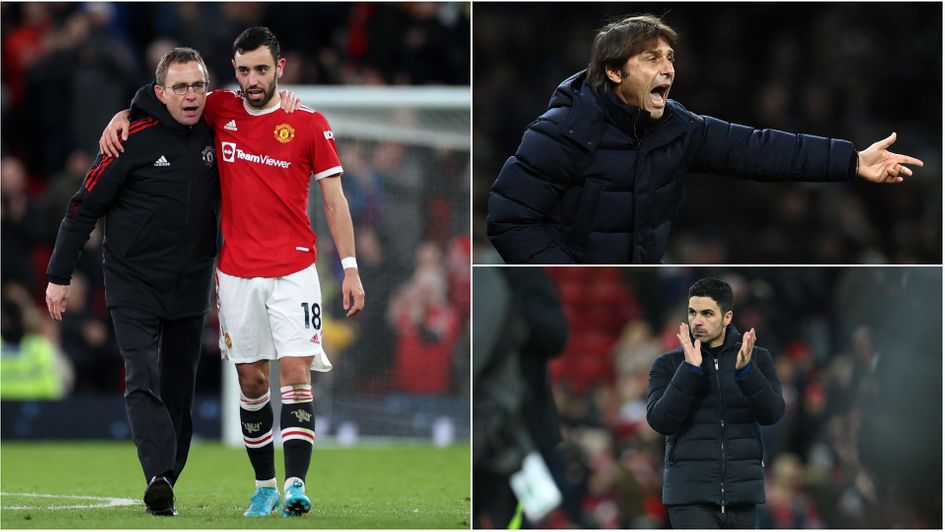 Ralf Rangick, Antonio Conte and Mikel Arteta are in for a long battle to claim fourth place

The final round of Premier League matches before an extended three-week breather - during which the chaos of the winter schedule and pandemic disruption will subside to give us a clean 'business end' when play resumes in February - cleared up a few things.

Chelsea's resounding victory over a Tottenham side with an inferiority complex proved that Chelsea make up a top three in a league of their own, while Manchester United's 1-0 win over West Ham suggested the financial gap between 'Big Six' sides and the rest is too large for the Hammers, or Wolves for that matter, to break the top four this season.

That means the fourth Champions League spot is likely to be a straight race between Tottenham, Manchester United and Arsenal, three teams beginning to get their act together under their respective managers – but flawed enough to provide us with many twists and turns ahead.

Here's a look at what Antonio Conte, Ralf Rangnick, and Mikel Arteta need to do, tactically and in the transfer market, to improve their teams and win the race.

The weirdness of Spurs' 2-0 defeat at Stamford Bridge, in which Conte used a back four for the first time since 2016 in an unnecessarily defensive 4-4-2 formation that saw four full-backs take to the field, was evidence that Tuchel is in Conte's head.

Chelsea's three wins, by an aggregate score of 5-0, came against three different Spurs formations. Conte will be relieved that he doesn't have to face the German again.

A first Premier League defeat in 10 games for Antonio Conte as Tottenham boss on Sunday.

Just six shots and 0.35 xG created at Stamford Bridge - only the second time they have recorded below 2 xG in that period. pic.twitter.com/2iuaqHG8Ui

The biggest tactical note we can give Conte, as if he needs it, is to hold firm to the principles and the foundations he has been laying in all of Tottenham's matches against teams not called Chelsea.

His 3-4-2-1 formation is taking shape nicely as Spurs gradually dial up the verticality and urgency of their possession and pressing.

The flaws are many, and will remain so while Conte spends the next few months drilling his hyper-detailed tactical ideas into the players, but already a resilience and defensive clarity has emerged that gives Tottenham the upper hand.

However, if anything will let them down it is a lack of creativity, and it is vital Daniel Levy makes moves in the transfer window this month. Failure to do so may mean losing Conte altogether, and it will almost certainly mean missing out on a top four berth; Spurs cannot rely on Harry Kane, Heung-min Son, and Lucas Moura alone. 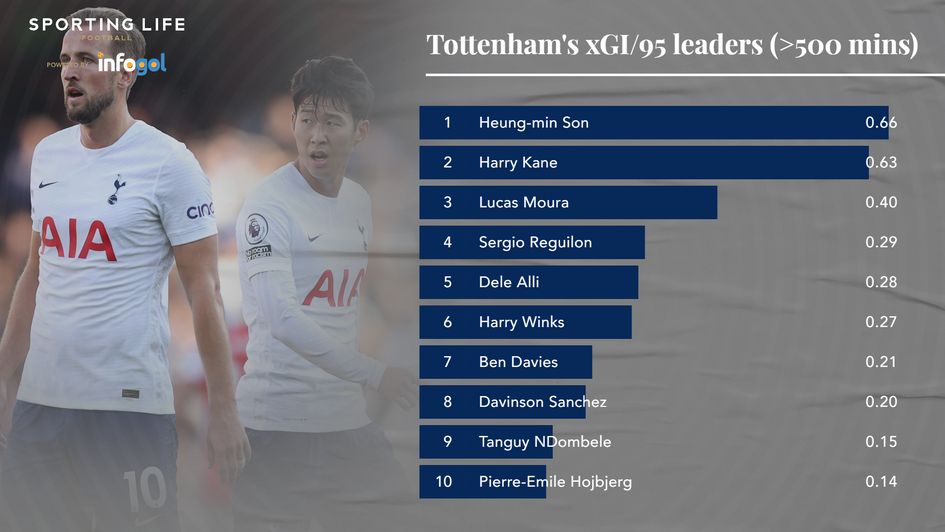 Conte needs a new right wing-back to upgrade on Emerson Royal, a player unable to take advantage of the attacking space he gets from the Conte-patented method of pulling the play to one side of the pitch before switching it quickly out to the free right wing-back. Perhaps Adama Traore is being signed for that purpose.

Spurs also need a creative midfielder in the mould of Christian Eriksen or Cesc Fabregas, the playmakers used in a midfield two under Conte in each of his last two jobs. Oliver Skipp, Harry Winks, and Pierre-Emile Hojbjerg all lack the vision and the speed of forward passing to enact Conte's tactical ideas, making Spurs too sluggish and sideways at times.

'You need to relax, Ralf'

The task for Ralf Rangnick is to find a way to bridge the gap between the rampant individualism of the Ole Gunnar Solskjaer era – which has created a culture of egotism and laziness – and his own desire for heavy-metal pressing and exacting tactical patterns.

The lurch from one to the other has been too extreme, the players seemingly unwilling to work for a man they know is unlikely to be in the dugout next season.

In other words, dial it down a bit Ralf.

He has already begun this process by abandoning the abysmal 4-2-2-2 formation, a system too flat and square-shaped to work at a club expected to hold 60+% possession.

The German needs to adapt to the club as much as the other way round, which means using a 4-2-3-1 formation that allows Bruno Fernandes to meander in his favoured number ten position. 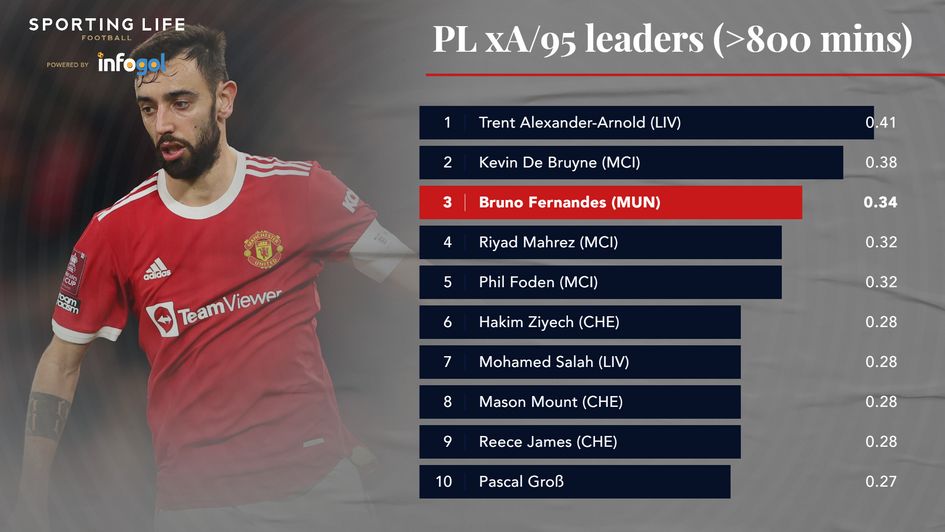 Secondly, Rangnick needs to put more faith in young players who are willing to listen to his demands and sideline those who won't.

Again, this is a process he has already begun, as we have seen with Anthony Elanga's introduction to the team and the substitution of Cristiano Ronaldo in the 3-1 win at Brentford.

However, at the moment United remain far too hesitant and decompressed in the press, squeezing through matches thanks to moments of quality rather than a unified team performance.

With Rangnick's future up in the air and little chance of the new recruits he needs – notably at right-back and in central midfield – it seems unlikely his team will win more points than Tottenham.

Progress being made at Arsenal

Put the 0-0 draw with Burnley, and an awful January, to one side.

Arsenal could barely field a full 11 for that game, and three weeks from now most of their first-team players should be back, at which point Arteta's side can pick up from where they left off on Boxing Day when a 5-0 win over Norwich made it five in a row.

Five games without a win since then has perhaps put Arteta back under pressure. 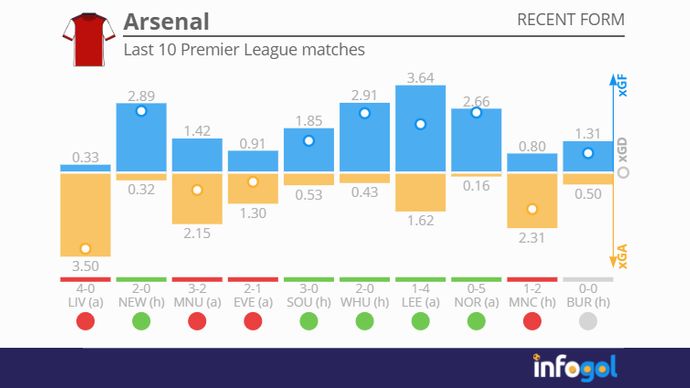 It certainly conforms to the view of his tenure as chaotic, although in reality there is clear progress being made; on their day – and the first half of the 2-1 defeat to Manchester City was the best example yet – Arsenal look like a Guardiola team, playing a positionally fluid 4-3-3 that puts Thomas Partey and Martin Odegaard front and centre.

Arteta has more authority now the fans can see his vision coming together, although another step backwards this month shows he badly needs to be supported in the transfer market.

Arsenal look lost without Partey stunting opposition counter-attacks and feeding the ball into the forwards, and whenever Odegaard has an off day the football looks blunt again.

Worse still, Pierre-Emerick Aubameyang's Arsenal career is all but over and Alexandre Lacazette remains too limited in the penalty area.

Arteta needs a striker and a couple of midfielders to cement their top four credentials.

He's unlikely to get it. Spurs, in complete disarray just a couple of months ago, should be firm favourites to take fourth. 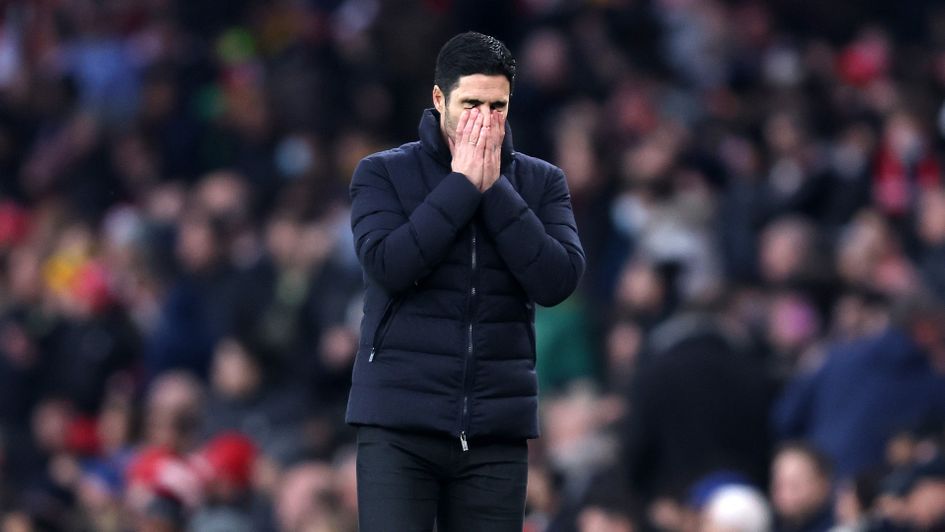