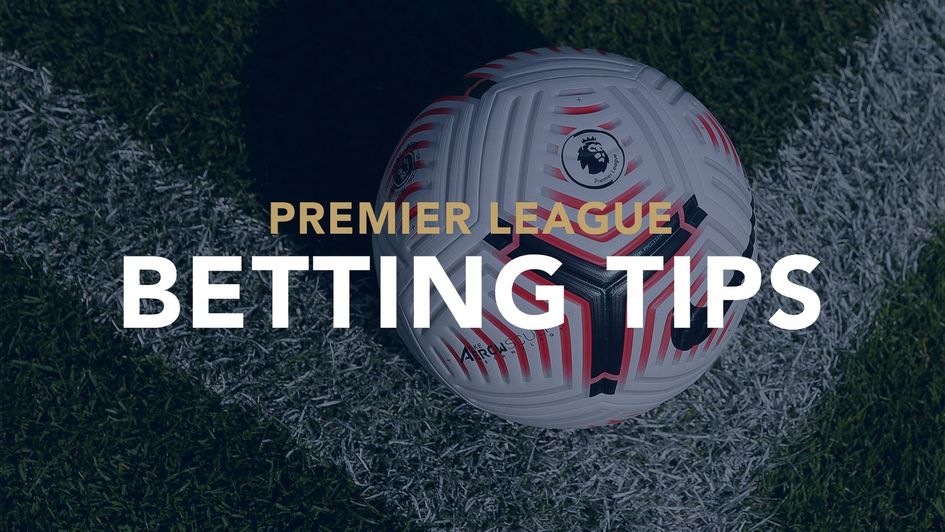 The Premier League has reached the final game of the season, with plenty still to play for. Our tipsters have a best bet for every match. 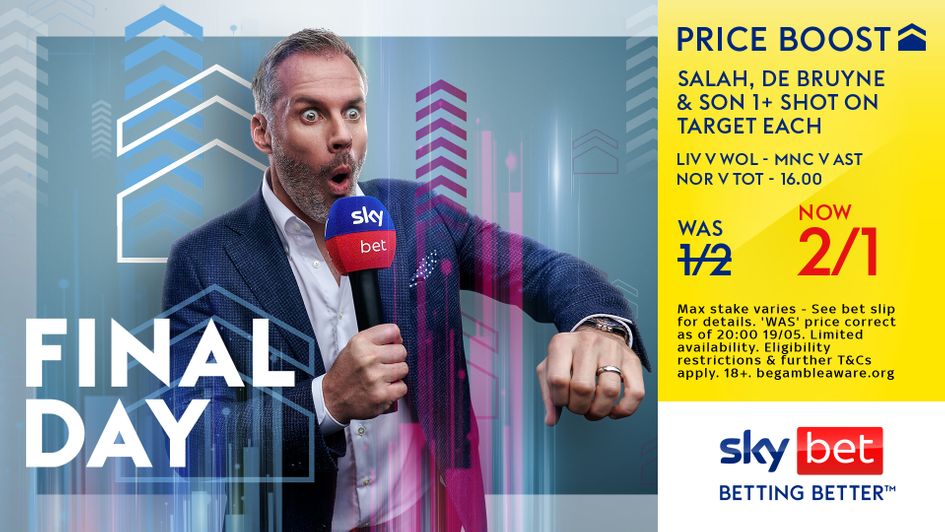 Arsenal's season is set to end in disappointment, it’s highly likely Mikel Arteta’s side will miss out on the top four. After a slip up against Newcastle in midweek, they must rely on rivals Tottenham to stumble if they are to reach the Champions League.

Everton head down south with safety guaranteed after a come-from-behind win over Crystal Palace on Thursday.

That said, the Toffees have been horrendous away from home under Lampard, averaging 1.00 xGF and 2.11 xGA per game.

Arsenal are 2/5 favourites but the 21/20 about ARSENAL/ARSENAL HALF-TIME/FULL-TIME is worth getting onside.

Arsenal like to get ahead early, with their average first goal coming in the 30th minute.

Win to nil may be longer at 11/8, but I'd say it's one to avoid with the Gunners' last clean sheet coming against Southampton on April 16.

Leeds need to better Burnley's result to stay up. If they lose away to Brentford on Sunday afternoon they are down no matter what happens elsewhere.

Worryingly for Jesse Marsch and his side is their horrific away form over the course of the season, they have allowed an average of 2.05 xGA per away game this term.

In contrast, Brentford have been one of the better home teams in the league this term, collecting the seventh most expected points (xP) and posting the seventh best home xG process (1.67 xGF, 1.06 xGA per game).

This campaign there’s been a gap in quality between these two sides. BRENTFORD TO WIN at 6/4 (SpreadEx) is a price I am happy to get behind. 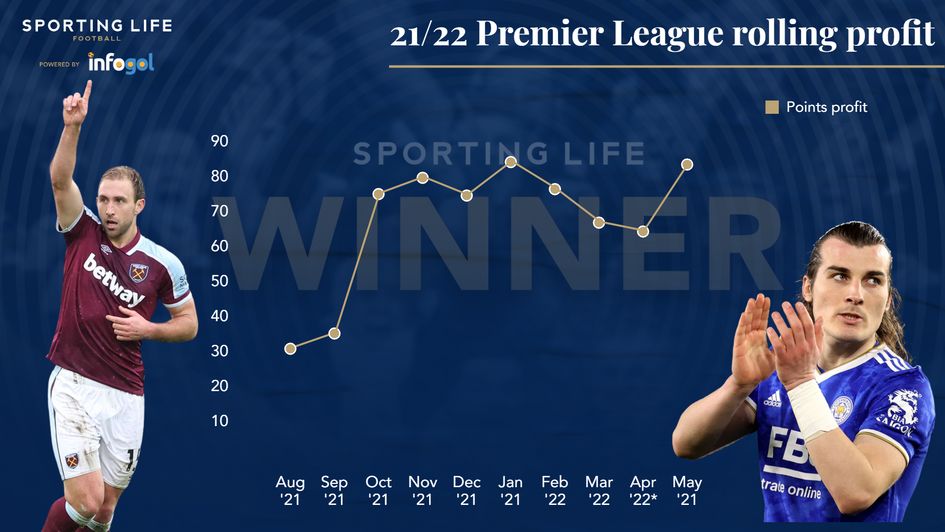 Brighton were denied another win by Leeds last weekend, conceding very late, but it was another good performance from a Seagulls side finishing the campaign strongly.

They have lost just one of their last eight (at Man City) while winning four, and Graham Potter's side have racked up 2+ xGF in all five matches against teams not in the top five during that stretch.

Home results haven't reflected performances this term, with their process of 1.53 xGF and 1.14 xGA per game the ninth best in the division - they have the fourth worst record.

West Ham are still in with a chance to finish the season in the top six, but have to win here, and their away xG process suggests that may be a struggle.

The Hammers have a negative process on the road, which tells that, on average, they concede more quality chances than they create (1.41 xGF, 1.72 xGA per game).

All of that adds up to me wanting to back BRIGHTON TO WIN here.

David Moyes's side may be fighting for a better European place, but Brighton are in search of a first Premier League top half finish in their history, and the reflective underlying processes of each team suggests that they should be a tad shorter to win here.

There are too many intangibles here to be able to bet with any certainty on so many aspects of this game. So much depends on how Leeds fare at Brentford – an early goal there completely changes Burnley’s approach.

The point here is to ignore Burnley. They’re the ones affected by proceedings elsewhere. Newcastle, meanwhile, will enjoy the freedom of not really caring about the result and that can be dangerous.

Of course, there has been one particular Newcastle player that has been especially dangerous in recent weeks – and I think he provides the best value bet here.

He’s only been on Tyneside for three and a half months but Bruno Guimaraes is already a cult hero. Five goals in 11 games is part of the reason for that. But it’s also important to note that he’s had 18 shots in 10 starts – including 10 efforts on target.

He’s averaging a shot on target every starting appearance. That makes the market-leading even money Sky Bet offer – 5/6 or 8/11 with most firms – on Bruno to test Burnley stopper Nick Pope mightily appealing. But it gets even better – Sky Bet have boosted that price to 6/4 on GUIMARAES TO HAVE 1+ SHOTS ON TARGET.

With safety tantalisingly close, the Clarets have really tended to sit back recently – conceding 24 shots on target in their past three matches, an average of eight per game.

Chelsea's season tailed off after the Christmas period, but they have still been the third best team in the league this term according to both the actual and expected tables.

Home results have been well below the standard we would expect, though performances have been deserving of more.

At Stamford Bridge the Blues have averaged 1.97 xGF and 1.18 xGA per game this term, an impressive process that highlights their attacking capabilities but also a defensive frailty, with that xGA per game average no where near the standard of the top teams.

Already relegated Watford are the visitors on Sunday, and they are winless in eight, losing seven.

The Hornets have created their fair share of chances in that time though, including last time out when racking up 2.06 xGF against Leicester.

In fact, they have scored in four of their last six, which also includes an away game at Manchester City.

In total they have scored in 44% of away games this term, and that, coupled with the fact that Chelsea have failed to keep a clean sheet in 65% of home games suggests CHELSEA TO WIN AND BOTH TEAMS TO SCORE should give us a run for our money.

The Blues are fully expected to end the season on a high and win this game, but the jump from a general 1/6 price for a home win to over 2/1 with both teams scoring looks too big.

I cannot believe my eyes. This Manchester United side who look to have completely downed tools are favourites to win at Crystal Palace...

This looks a great opportunity to back a very good PALACE team TO WIN at a huge price.

The Eagles have been one of the season's major data stories, currently residing in the bottom-half despite ranking sixth based on expected points and expected goal difference.

Patrick Vieira's side have been simply excellent at home this term, averaging 1.69 xGF and 0.98 xGA per game, and we can be sure that they will want to go out with a bang in front of their own fans.

United, on the other hand, are looking to the future rather than the present and are just rolling over away from home, losing their last five by an aggregate scoreline of 16-2, averaging a pathetic 1.05 xGF and 2.11 xGA per game.

They should not be favourites here, and Palace look a great bet to end the season on a high.

It goes some way to showing the progress made at Leicester that this season feels like a disappointment, even though the Foxes are well-placed for a top-half finish.

Defensive injuries have hampered them throughout the campaign, but with a full complement re-emerging results and performances have picked up.

Brendan Rodgers' side have hammered both Norwich and Watford of late, and a hosting of a Southampton side bang out-of-form should present another very good opportunity to pick up three points.

The Saints have won just one of 11, losing eight in that time, as they appear to have the sandals and the beach ball at the ready.

Their process in that time has been atrocious (1.19 xGF, 2.13 xGA per game) and highlights that the results they have attained have been fully deserved.

So given how poorly they have played for a couple of months now, it is surprising to see LEICESTER TO WIN priced up at near even money.

The Foxes have won nine of 18 at the King Power this term, winning six and losing just one of 10 games against sides below them in the table.

It's must-win for Liverpool if they are to have any chance of winning the Premier League title.

Fortunately, the Reds have been simply incredible at Anfield this season, winning 14 of an unbeaten 18, posting an eye-watering underlying process of 2.77 xGF and 0.69 xGA per home game.

Wolves should be fearful, especially given their slump, with Bruno Lage's side having lost the xG battle in 14 of their last 17 league games.

Across that period they have averaged 0.99 xGF and 1.80 xGA per game, with that attacking process the worst in the division over that period.

All of this highlights that LIVERPOOL TO WIN TO NIL has to be backed here.

Not only do all the stats point that direction, but the price makes it irresistible, available at 10/11. The same bet is as short as 3/4 in places.

Add to this the fact that this bet has won in 12 of Liverpool's 14 league victories at Anfield this season, and that it has landed in six of the last seven league head-to-heads, and this selection looks an absolute cracker.

Unlike their previous triumphs under Pep Guardiola, should Manchester City complete the job this will be a title win built on defence.

They may only have conceded one goal fewer than Liverpool, but they are streets ahead when it comes to Infogol's underlying numbers.

It's hard to make a case for Villa to breach the Manchester City rearguard - especially with so much on the line for Guardiola's men.

For all the goals City have scored recently they have still conceded only once in their last three league games at The Etihad. That's enough for me to get the 5/6 market-leading price from Paddy Power and Betfair for MAN CITY WIN TO NIL onside.

Norwich are unlikely to put up much resistance against a Spurs team in good form and looking to secure Champions League football, but to say how bad they have been, the Canaries have rarely been involved in majorly high-scoring games this term at home.

UNDER 3.5 GOALS has landed in 12 of 18 at Carrow Road, while it has landed in eight of Tottenham's 13 away games under Conte, so combining that with a TOTTENHAM WIN looks the way in here.

Spurs are fancied to win this with ease and in control, and while win to nil did appeal at a shorter 23/20, the bigger price and slightly wider margin for error appealed.