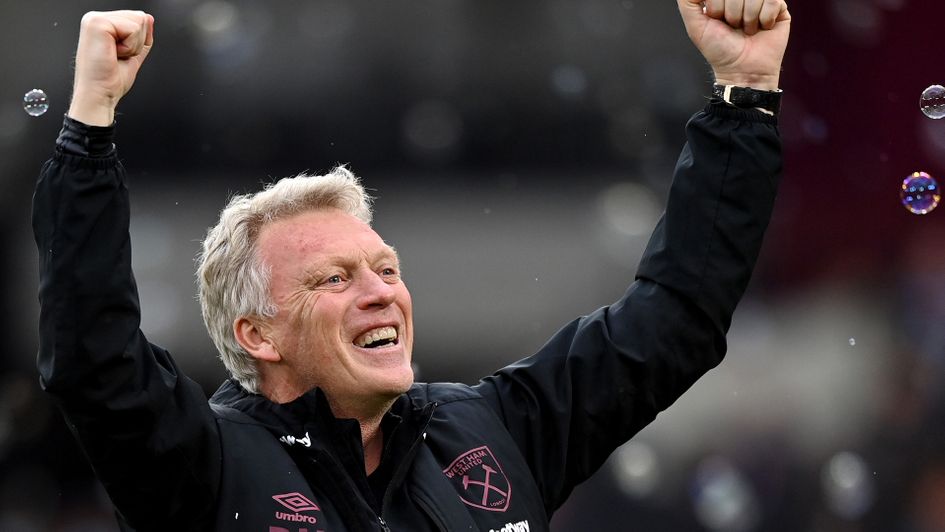 West Ham began Tuesday with a controversy about a defender kicking his cat and ended it in the top four.

If David Moyes hopes the former problem soon disappears, he would like the latter to become a permanent state of affairs.

If West Ham are outsiders for a top-four finish, it is in part because of reputation and history: they do not have one in the top flight since 1986.

But recent form is a factor, too: they have lost six of their last 13 league games. Compile a table since the November international break and West Ham are seventh, above only Arsenal of the top-four contenders, and even then the Gunners have three games in hand.

They have taken 17 points from their last 13 games: repeat that and they will enter the final match of the campaign with 57 points. But they took 23 from their first 11: copy that now and they would have 63 with three matches remaining.

Since the November international break, West Ham have the fourth worst xGA (expected goals against). Over the campaign as a whole, their xGA of 34.9 is higher than all their immediate rivals except Manchester United. Indeed, it is more than bottom club Burnley’s 33.5.

But every table at the moment is skewed because of the different number of games played. Arrange the table on points-per game and United, Arsenal and Tottenham all go above them.

Moreover, the fixture list suggests their run-in is harder than recent games: they have three of the top seven home, three more away.

Four of the five teams West Ham have played twice (Watford, Crystal Palace, Leeds and Southampton) are bottom-half clubs; they still have to face everyone except Manchester United in the top half. Infogol forecasts their finishing position will be seventh.

So if there are reasons to doubt their credentials, it is also worth pointing out that they are not just the top scorers of the contenders for fourth but also the team with the best expected goals, of 39.5, and fourth for expected assists. They finished last season with the fifth best xG.

Indeed, they had the sixth best xG after lockdown in the summer of 2020. Under Moyes, they have been consistently creative and potent. Their average expected goals difference (xGD) per match this season is +0.18. It is bettered only by the top three and Tottenham.

They go to Leicester on Sunday as the new Leicester, the budget challengers to the regular suspects. As with Leicester, they have done it their way: they cannot compete in every category but they can beat the best, as wins over Liverpool and Chelsea this season show.

Are West Ham the new Leicester?

West Ham’s method is not based on possession – they average 47.9 percent and, apart from Wolves, the other top-four candidates have the majority of the ball. Indeed, Moyes’ team have less of the ball than Manuel Pellegrini’s side did in 2018-19.

But they also have elusive, irrepressible forwards. Jarrod Bowen is joint fifth for shots this season, with 59. Michail Antonio is seventh, on 57. Said Benrahma (46) is 13th. Bowen (23) is third for efforts on target, with only Mohamed Salah and Harry Kane ahead of him.

Each has become more of a threat: Antonio was 26th for shots last season, Bowen 41st, Benrahma 82nd. Antonio and Bowen are seventh and 10th respectively for shot-creating actions; last year, they were 69th and 44th.

🔥Jarrod Bowen scores the winner in a man-of-the-match performance against Watford.

⚽️The former Hull forward has now been involved in 14 goals for the Hammers this season. pic.twitter.com/pH9Toi6Jnp

Bowen (seven goals, seven assists) and Antonio (eight and six) share second place in a combined chart for goals and assists, with only the runaway leader Salah above them.

Indeed, only three Liverpool players have more assists than Bowen. And he has form: since Christmas, Bowen is both the division’s joint top scorer (with four) and assister (three).

It helps that West Ham are better at getting the ball where it matters. Last season, they had the 11th most touches in the opposition box. Now they are fourth.

A high-class Rice is nice

Part of West Ham’s improvement, and their ability to get forward, stems from Declan Rice’s transformation into a high-class midfielder.

If Bowen, Antonio and Rice can sustain their form, it indicates West Ham have enough attacking threat to finish fourth.

Where they need to get better now is at the other end: since October, their only clean sheets have come against Burnley, Norwich and Watford. They only have six in the season so far.

Last season’s top four all kept at least 12 so West Ham may need to double their tally in their last 14 matches if they are to have Champions League football next season.

And – from a footballing perspective, anyway – it indicates why Moyes was so keen to pick Kurt Zouma against Watford on Tuesday.