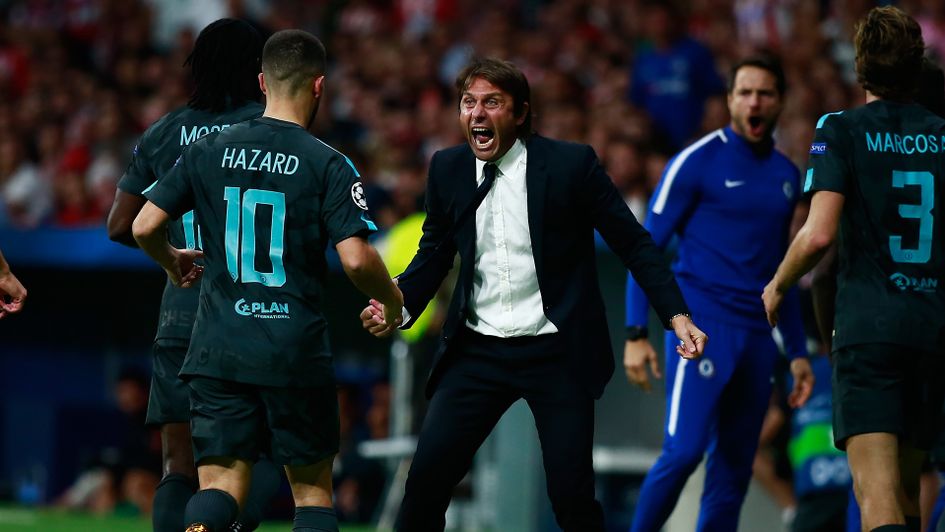 Antonio Conte celebrates on the touchline

Recap a thrilling night of Champions League football as Chelsea, Manchester United and Celtic all won away from home.

2140: What a finish in Madrid. Much more straightforward and far less dramatic in Russia, where a late consolation for CSKA still saw United win 4-1, while Celtic have wrapped up their 3-0 win in Anderlecht. They face Bayern next, a side who have been beaten 3-0 by PSG.

That's it from us - stick around on site for reports and reaction from a thrilling night.

2138: Full-time! Chelsea have done it! That's a remarkable win for the Premier League champions and they're celebrating like they've won the Champions League. Costa looks distraught in the fans, no doubt a picture we'll see doing the rounds soon enough.

2137: GOAL! Celtic seal a fine night for the British sides with a third in Belgium.

2135: GOAL! Chelsea have stolen it! A cheap free kick is worked short, and beautifully, through one of the tightest defences in Europe. Eventually a low ball comes in which Batshuayi sweeps home. What a comeback!

2133: GOAL! It's 4-1 in Moscow and Mourinho will be frustrated not to have kept a clean sheet. The only two games in which both teams have scored tonight have been those involving Premier League sides.

2130: Chelsea have done superbly well here with two minutes of normal time remaining. Atletico certainly showing the greater intent but it looks like Morata's goal may secure a point for the away side. 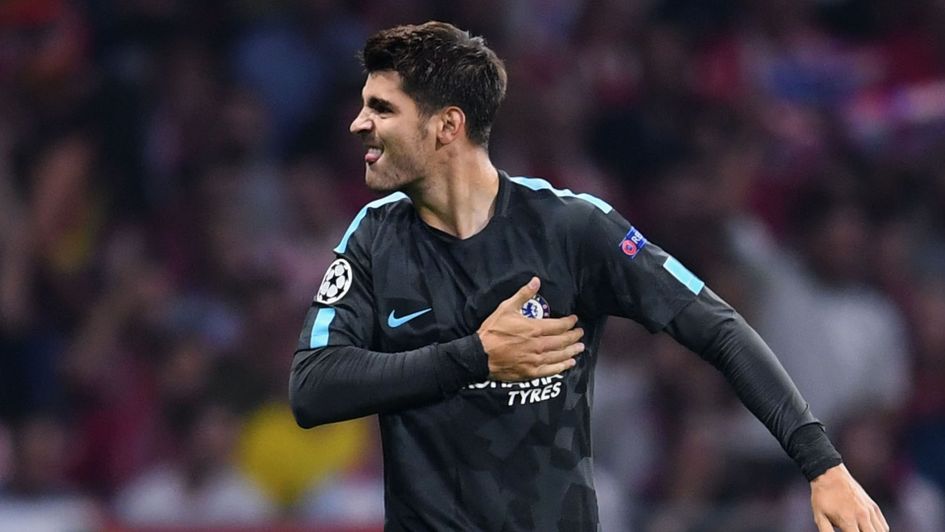 2128: Akinfeev has kept the score semi-respectable in Moscow, believe it or not, as Rashford showboats by shooting from 40 yards, roughly 40 yards over the bar.

2125: Into the dying minutes in Madrid and Batshuayi and Willian are on for Chelsea. All quiet elsewhere.

2122: GOAL! Juventus lead 2-0 and that's another ticked off if you've played the short-priced favourites as Mandzukic taps home from close range.

2118: GOAL! It's 5-0 on a famous night for the Swiss side Basel. More rubbish defending. My handicap bet on the visitors is going to fail by seven goals - minimum.

2117: That 11/2 Morata should have landed. He's through, pokes past the Atletico keeper... but the ball trickles wide. Huge opportunity for the visitors.

All eyes on Madrid then where Chelsea are back on top. The draw is odds-on, while Sky Bet make Morata 11/2 to score again and Luiz 10s to be sent off.

2114: Bayern's night in a nutshell as Vidal has a goal ruled out for offside. In the Championship, Sheffield United lead 10-man Wolves 2-0 but it's goalless in Birmingham, where City host Sheffield Wednesday.

2112: GOAL! Higuain puts Juve ahead. Inevitable, I suppose. They're flying in across Europe now.

2110: GOAL! Basel lead 4-0. Game over in Switzerland and a pathetic performance from the visitors.

2108: GOAL! It's 3-0 PSG as Neymar reacts quickest to fire into the roof of the net from five yards.

2105: Chelsea should be in front. Cesc, six or seven yards out, has the goal at his mercy but fails to make the right connection with his left foot.

2055: GOAL! Celtic lead 2-0! It's an own goal which is huge in their bid to either a) qualify from this group or b) finish third and drop into the Europa League.

2045: Atletico are 2/5 to go on and win, with Chelsea 10/1 to produce what would be a pretty remarkable turnaround, roughly the same price Celtic are (4/9) to complete the job in Belgium.

Click here for all of Sky Bet's latest odds including Price Boosts, including from Russia where Lukaku is now just 6/4 to secure a hat-trick.

2033: Half-time across Europe. Celtic lead. United have done the job already. Chelsea trail by one. All to play for after the break, which we'll fill with tea, chocolate and the latest odds in just a tick. 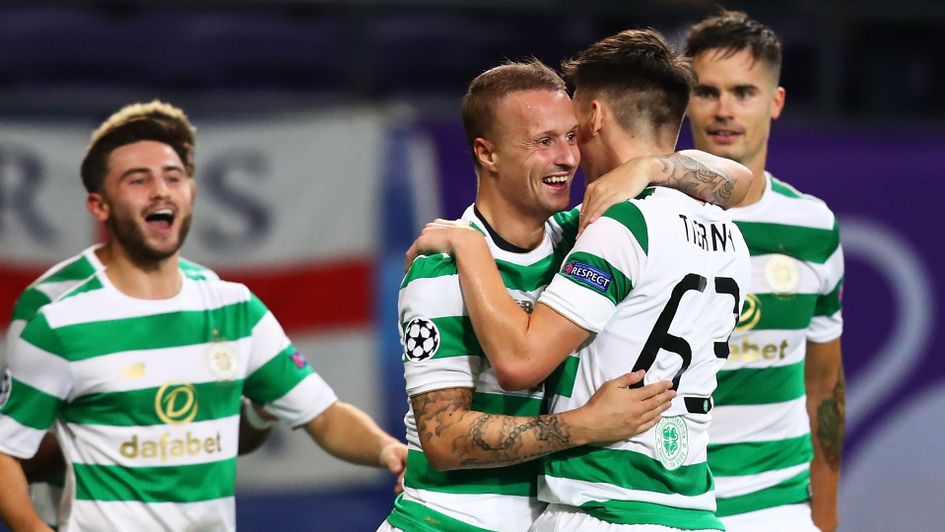 2032: Koke's long-range strike forces a save from Courtois but he spills it and Chelsea are fortunate to escape, with the follow-up running just wide of the post. And I mean just. Atletico smell blood here after a slow start.

2031: With half-time approaching, still nothing for Juve - despite Dybala looking a threat with every attack - while it's also goalless in Lisbon. Two of the so-called bankers of the night struggling to break the deadlock.

2028: Huge blow for Chelsea, that, having previously looked in good shape. In Paris, the hosts almost make it three as Mbappe flies down the right before a dangerous ball across goal is cleared.

2024: GOAL! Celtic take a deserved lead after a sweeping attacking move which ends with Griffiths bagging his seventh goal of the season, having found space at the back post. It was a matter of finding that final ball which had so far been lacking. Job done. 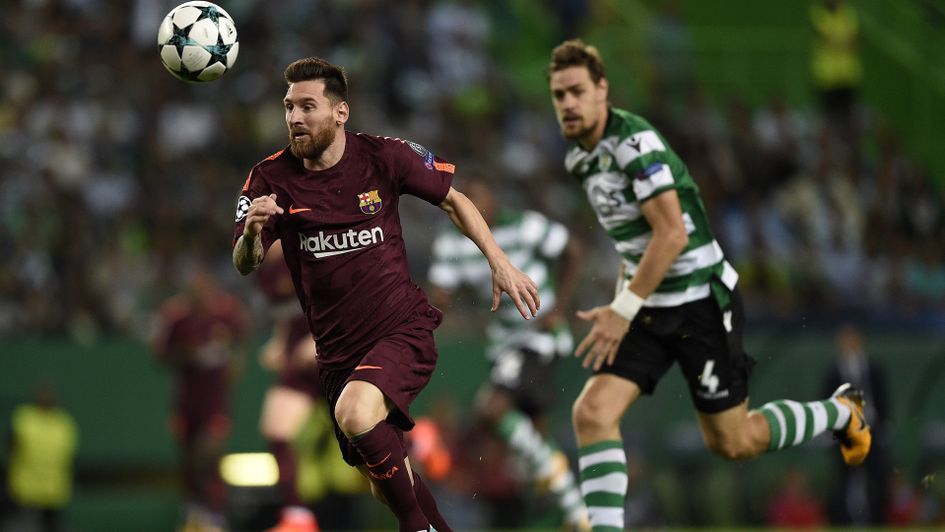 2020: GOAL! PSG lead 2-0. It's not on the break this time but it is sumptuous, as Cavani curls home from 20 yards. Bayern in all sorts of trouble. At least one of the handi-acca is doing well...

2019: Much better from Celtic after a bit of a shaky start and they're dominating possession against Anderlecht. Nothing in the way of genuine chances as yet but Brendan Rodgers will be happy with what he sees.

2016: Cavani fires wide from 15 yards, again on the break, as Bayern surely push too hard for the equaliser. Meanwhile it's six attempts now for Chelsea, two on target, as they limit Atletico to very few chances. They're 9/4 to win or 9/2 to do so without conceding, both of which make some appeal the way things look right now.

2015: Barcelona are close to an opening, you'd think, as Suarez and then Messi both miss good chances.

2012: GOAL! Game over. United now lead 3-0 after a Martial cross somehow finds Lukaku five yards out and in acres of space. Awful from the hosts, ruthless from the visitors, and it's 3-0 United.

2010: PSG are indeed looking very dangerous on the break, twice launching forward after Bayern had been in their box. In Madrid, Morata forces a good stop from Oblak after a beautiful ball from Luiz found him at the back post.

2008: Barcelona should be in front as Suarez misses a good chance in Lisbon, while over in Paris it's Bayern who are doing much of the pressing. I wonder whether PSG are eyeing a Basel-style counter-strike to take total control of that huge game.

2007: GOAL! Benfica firmly on top in Switzerland... but 2-0 down. From a corner, they lose the ball and Basel rip them apart on the break, Oberlin bursting through to finish.

2005: GOAL! Martial puts United 2-0 up from the penalty spot after a foul on Mkhitaryan in the box. That's probably job done for the visitors and could be more good news for Boost backers - the French attacker was 16s for a brace and is now halfway there...

2003: In the Championship, Wolves are down to 10 men at Sheffield United, who are now even-money to back-up their Steel City Derby win with another three points here.

2000: Hazard strikes the post from distance as Chelsea remain firmly on top. That was an inch or two from being the goal of the night, surely, with the keeper nowhere. In Russia, Mkhitaryan should score but fires straight at Akinfeev in the CSKA goal.

So far, so good for the British sides in action.

1957: Lukaku has scored in seven straight games now for United, a phenomenal start to his career, and is 11/1 to score a hat-trick tonight with Sky Bet.

CSKA come close to an equaliser but De Gea is down to save and it's the visitors who remain in front and largely looking good.

1955: Anderlecht on top in Belgium as a free-kick from Dendoncker goes up, up and up, over the bar of Craig Gordon.

1953: Breathless stuff so far. It's calmer in Madrid as you'd expect, where Morata fires wide with Chelsea's second genuine chance. It's been an encouraging start for the visitors against a side who just do not lose home games in the Champions League.

1950: GOAL! PSG lead Bayern after 88 seconds! Alves is at the back post to fire home emphatically for the side who are going to win the whole thing.

GOAL! And in Russia, Lukaku nods United ahead - a winner for 7/1 Price Boost backers.

1947: Under way then and an early corner for Atletico, but Godin is nowhere near getting on the end of it as Chelsea clear. Come on the handicap acca. The handi-acca. No goals yet...

1941: Out of nowhere I've done a handicap four-fold which pays about 100/1. Gulp. Barca. Benfica. Anderlecht. PSG. If all four of these win by two or more goals, the drinks are on me*.

*They're not, buy your own

1932: Admission: I'm not expert on Belgian football. Nor Scottish football, for that matter. But Celtic's abysmal away record in Europe is sufficient to make Anderlecht tempting, surely. The hosts might not be all that good an outfit and it's not been a good start to their domestic campaign, but a come-from-behind 2-1 win on Saturday courtesy of two late goals might just put them in position to take care of Celtic here.

Anderlecht did all right in losing 3-0 at Bayern a fortnight ago, given that they were down to 10 men after 11 minutes. They're fairly priced at 6/4. 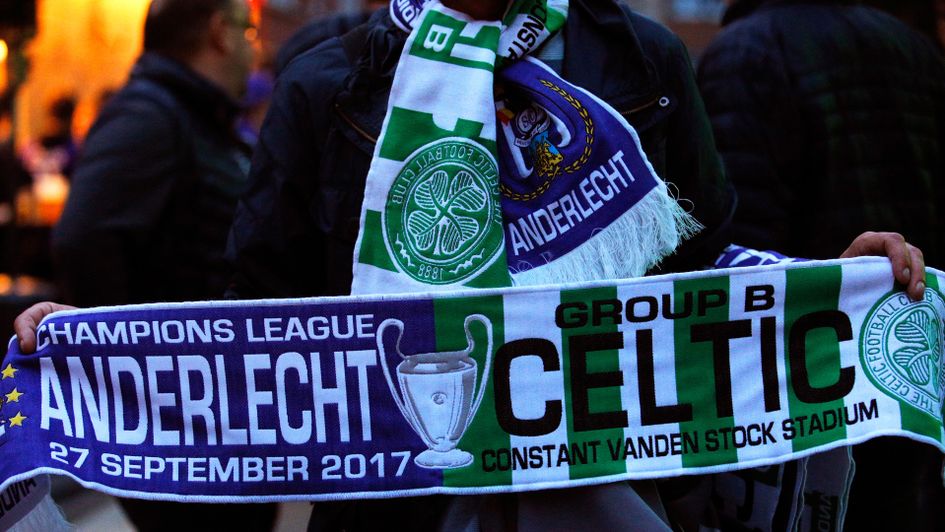 European nights are the only time these scarves should be permitted

1925: As for the game in Moscow, United's line-up worries me a little. Sky Bet have Martial at 16/1 to score a brace, one of several Price Boosts, and that's tempting given that the young Frenchman looks to be full of confidence right now, but my gut feeling is United will play to keep things very tight. Perhaps a 1-0 win at 9/2 is the sensible option.

You can click here for all of Sky Bet's markets on the game. Among the other Price Boosts is Lukaku to score a header at 7/1 while it's 40/1 about a 4-0 win for the visitors. 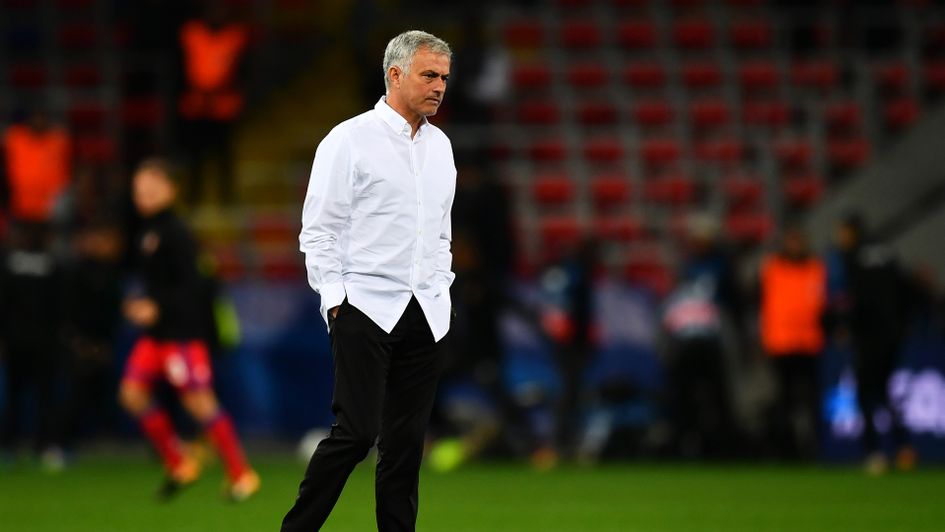 1920: My fancies, for what they are worth. PSG to beat Bayern... on the handicap. Yes, I said on the handicap. Bayern are struggling for confidence and cohesion, with a definite disconnect between some senior players and senior management. PSG are 21/10 to win by two or more with Sky Bet and I like 'em.

It's hard to take a strong view on Atletico v Chelsea, but 9/2 that the first goal is a header tempts me. However, I'd rather go even more ambitious to minimum stakes and split Godin (22/1) and Luiz (40/1) to open the scoring. Set-pieces could be key to what is surely going to be a cagey, tight game where one goal could well decide the outcome.

1913: We'll run through some markets, Price Boosts and whatever else in the near future but first, I recommend you take in Andy Schooler's thoughts. He's focused on the games involving United, Chelsea and Celtic, but also has a 'best of the rest' section towards the bottom of this excellent preview.

1910: And there's lots more besides this of course, with Celtic taking on Anderlecht after their drubbing at the hands of PSG, Juve hosting Olympiakos as the shortest-priced team on the coupon, and Barcelona also odds-on to win at Sporting Lisbon where some fans have enjoyed a glorious day in the sunshine. 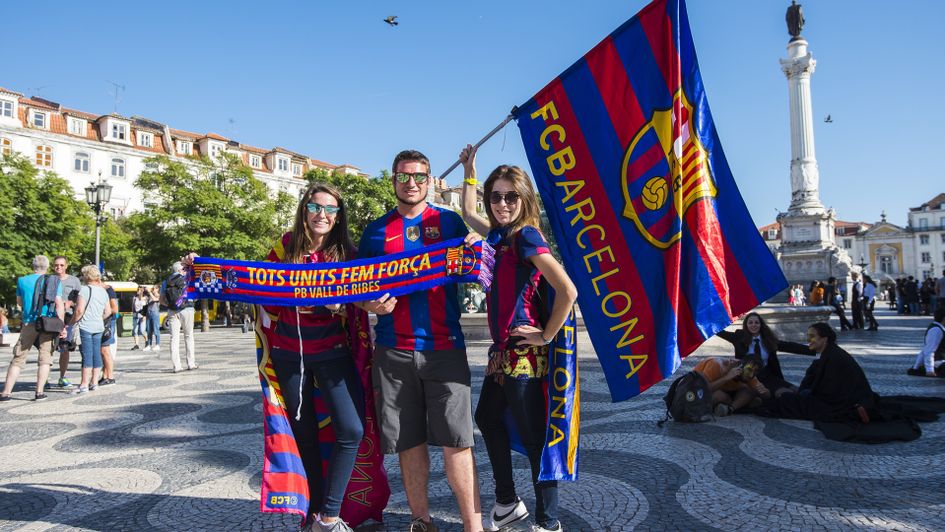 Barcelona fans soak up the sun in Lisbon

1908: Chelsea are in Madrid to take on Atletico, who yesterday confirmed the return of Diego Costa from tonight's visitors.

1900: Good evening and welcome to tonight's Champions League blog, which will also provide updates from the Sky Bet Championship and two fascinating games there.

First, some team news involving the Premier League sides featuring in Europe, starting in Russia where Jose Mourinho has named Ashley Young as Manchester United captain having made five changes from the weekend.