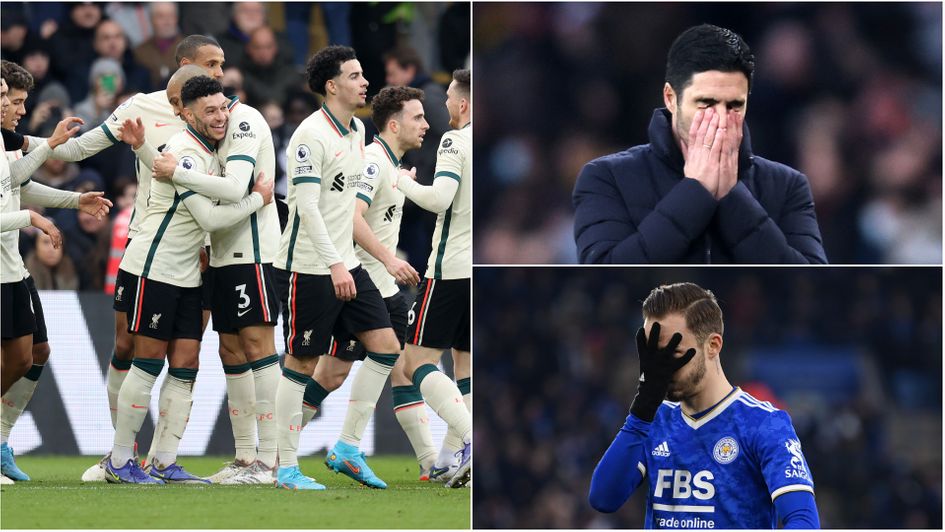 Liverpool closed the gap on league leaders Manchester City with a win over Crystal Palace. Elsewhere Arsenal were held by Burnley and Leicester drew with Brighton.

Liverpool closed the gap on league leaders Manchester City to just nine points, with the Reds having a game in hand, after a hard-fought success at Selhurst Park.

Virgil van Dijk put Jurgen Klopp's side ahead in the 8th minute, as Liverpool were fast out of the blocks, and Alex Oxlade-Chamberlain doubled their lead after the half-hour mark.

Andy Robertson, who has been in fine form of late, was the creator of both goals.

They were too good for Crystal Palace in the first 40 minutes, but the Eagles showed signs of life just before the break.

After the break the hosts were the better side, creating the better of the chances and reduced the scoreline in the 55th minute through a great move finished by Odsonne Edouard.

They pushed for an equaliser, but with the game fizzling out, a penalty was given to Liverpool after a lengthy VAR check following a collision between Diogo Jota and Vicente Guiata.

Fabinho dispatched the spot-kick to make sure of the victory for the Reds, with the defeat leaving Palace 13th.

Burnley returned to Premier League action for the first time in three weeks to hold Arsenal to a goalless draw at the Emirates Stadium.

The Clarets have seen a host of games postponed this month due to not having enough players available and fell to the foot of the table as their rivals were able to fulfil fixtures.

Wins for fellow relegation candidates Norwich and Newcastle earlier in the weekend only heaped pressure on Burnley, but Sean Dyche’s side battled to a hard-fought point against a below-par Arsenal.

The Gunners are still without a win in 2022 as their top-four ambitions continue to falter.

There was never a siege of the Burnley goal from the hosts, instead, the likes of Ben Mee and James Tarkowski held firm as Dwight McNeil had the best chance to win it for the visitors in the closing stages.

But Burnley were still able to frustrate the home side and move to within four points of safety, with four games in hand over Norwich in 17th place.

Danny Welbeck grabbed a deserved point for Brighton as another Seagulls late show earned a 1-1 draw at Leicester.

The substitute levelled with just eight minutes left as the visitors again rescued a game which looked to be slipping away.

Graham Potter’s side have scored after the 80th minute in five of their last nine games to snatch points.

Patson Daka had put the Foxes ahead immediately after half-time but they failed to hang on and narrowly avoided another late collapse.

Days after conceding two Steven Bergwijn stoppage-time goals to lose 3-2 to Tottenham they needed Youri Tielemans to clear off the line from Dan Burn and Kasper Schmeichel to save from Leandro Trossard to ensure they took a point.

It dented their lingering European hopes while a point will surely embolden the Seagulls, who remain four points above the 10th-placed Foxes.