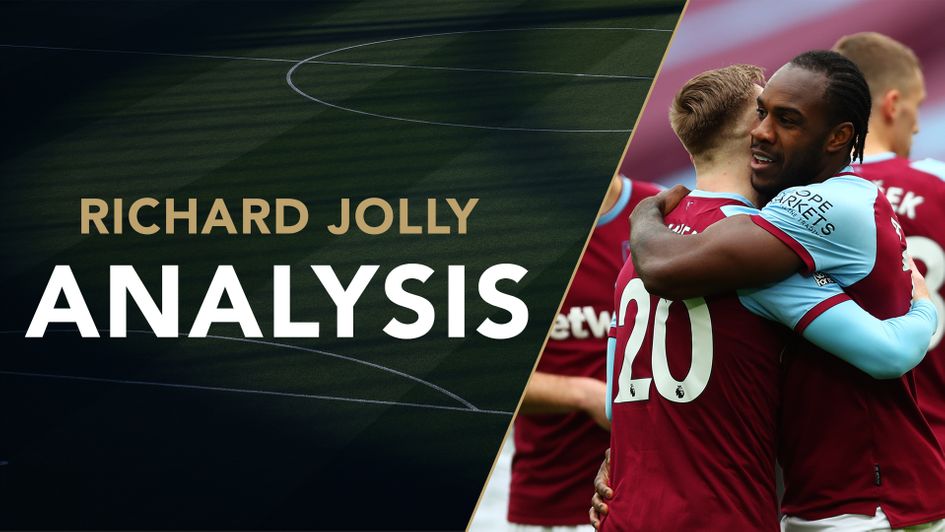 West Ham: Can David Moyes' side finish in the Premier League's top four this season?

Three shots, none on target, a place in the relegation zone and a performance of such timidity that Rodri was allowed to make 178 passes.

The last time David Moyes managed at the Etihad Stadium was also the last time Manchester City won a Premier League game in front of their own fans. It feels longer ago than the year it actually is. He returns on Saturday with West Ham in the top four.

It is more than a decade since Moyes won there, 2-1 with Everton on a night when temperatures touched minus nine. Since then, he has gone 4-0 down in the opening 50 minutes with Manchester United and lost on his bow as Sunderland manager. But it is the difference a year has made that feels most significant.

Then West Ham had 24 points from 25 games. Now they have 45, an improvement of 87.5 percent. They are on course to finish with 68 points, beating Moyes’ Premier League best of 65 with Everton in 2007-08. Their recent rate of progress positions them to do even better: their 22 points in 2021 is second only to City. That seven of their next eight opponents are in the top 12 means it will be hard to sustain that form. 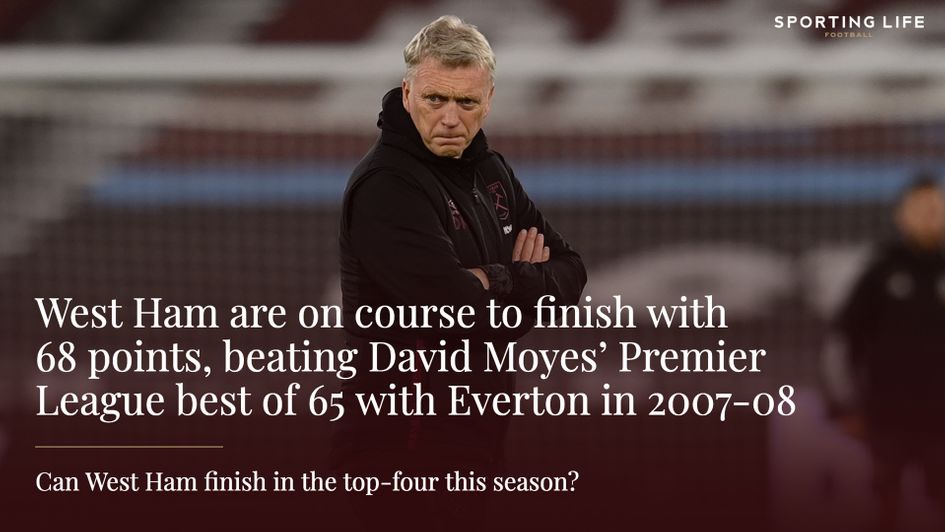 West Ham are enjoying a memorable season under David Moyes

West Ham are ninth for shots per 90 minutes and eighth for shots on target. If that all suggests an overachieving upper mid-table team – and their nine wins by one-goal margins shows they specialise in prevailing in close games – there are factors that give them an edge.

They have been good in both boxes. They have the most penalty saves (two), while only three teams have kept more clean sheets. Their tally of 12 set-piece goals is the highest, their ratio of 15 percent of shots coming inside the six-yard box the most and their finishing clinical: a return of 0.34 goals per shot on target is the joint best, with City and Everton.

West Ham do not have any of the top 14 scorers, but different players have chipped in to ensure their finishing has been fine. Among players with at least eight league goals, only four average more per shot on target than Tomas Soucek (0.47). Jesse Lingard’s percentage of shots on target (66) is second only to Alexandre Lacazette while Michail Antonio’s 1.32 shots on target per 90 minutes puts him fifth. 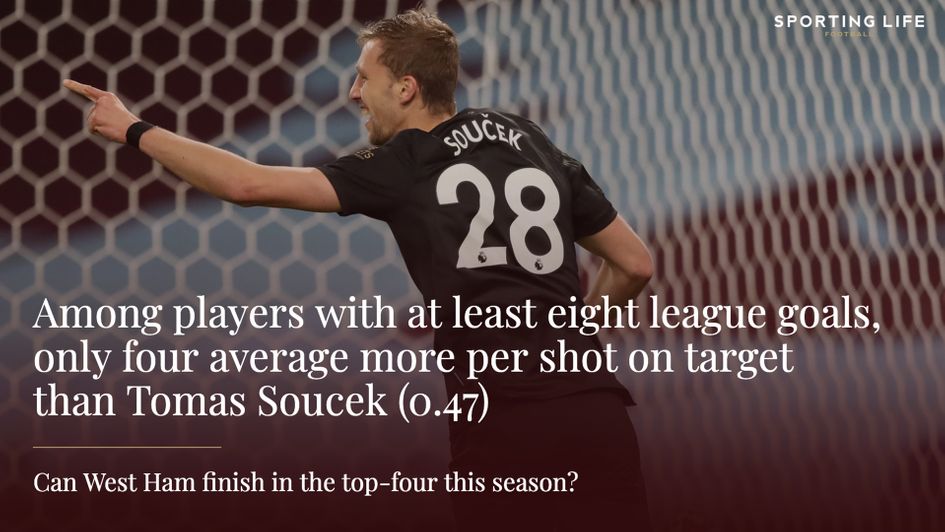 Tomas Soucek is a vital part of this West Ham team

Soucek has been a symbolic figure – Jose Mourinho called him Moyes’ new Marouane Fellaini – but the formula is familiar. No player ever got more than 15 Premier League goals in a season for Moyes but in four of his last nine seasons at Everton, his top scorer was a midfielder, whether Tim Cahill or Fellaini and, among central midfielders in the division now, only Ilkay Gundogan has found the net more than Soucek. Like Marko Arnautovic before him, Antonio is a converted winger who had his most prolific Premier League season as a striker under Moyes.

Individually, West Ham do not have any of the most creative players in open play but Aaron Cresswell (27) ranks second only to Mason Mount for chances created from dead-ball situations. He is the defender with the most assists in the division; the last Moyes defender to have that accolade was Leighton Baines, another left-footer who excelled at set-pieces.

But where West Ham players tend to stand out is in the defensive metrics. As a team, they rank second for interceptions and joint third for clearances. There are plenty of contributors: Angelo Ogbonna has made the fourth most clearances, Vladimir Coufal ranks eighth for blocks and joint second for passes intercepted. Declan Rice is third in the tackling charts and has made the most interceptions. Soucek is the runaway leader in the table for most aerial battles won, 33 ahead of Oli McBurnie. 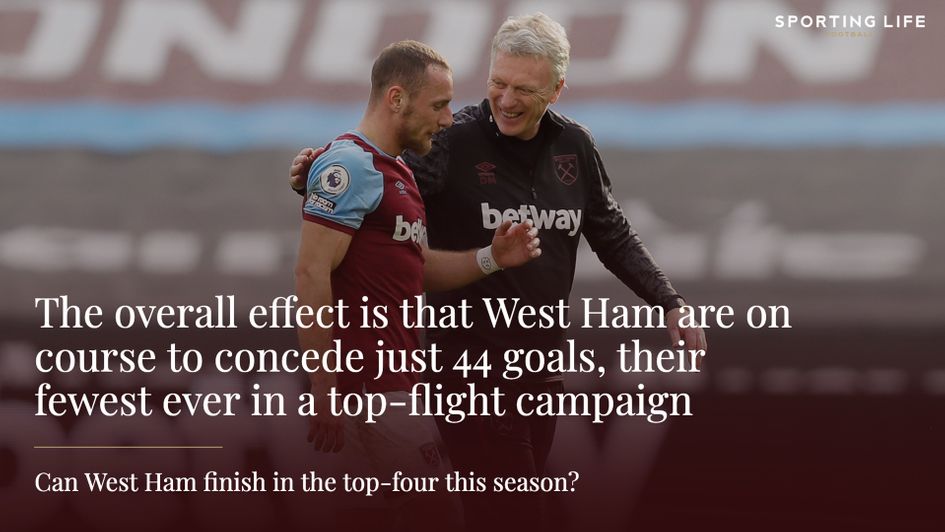 West Ham's defence have enjoyed a great campaign so far

The overall effect is that West Ham are on course to concede just 44 goals, their fewest ever in a top-flight campaign. The rearguard has an added importance because they need to be flawless as West Ham spent the majority of matches without the ball. Their 41.8 percent share of possession is only the 15th highest, as is their pass completion rate of 77.0 percent. They have 24 points from their last 11 games, but in only one – against West Brom – did they have more than 46 percent of possession. They have no player in the top 33 for passes made in the Premier League or the top 66 for average passes per game.

It is worth stressing what an outlier they are; Everton, at 46.9 percent of the ball, are the next lowest of the contenders for the Champions League places. When Leicester won the league in 2016, it was with 44.8 percent. West Ham are on course for the smallest share of possession for any top-four finisher since such statistics were first compiled; it would be intriguing to know how they compared to the Everton side of 2004-05 in that respect. His later Everton teams averaged between 48 and 52 percent.

But it illustrates why he was a poor fit for Manchester United. Moyes has a strategy to get the most from comparatively limited players who are not expected to dominate possession. It is a formula that worked for a decade at Everton, and it has been revived at West Ham.