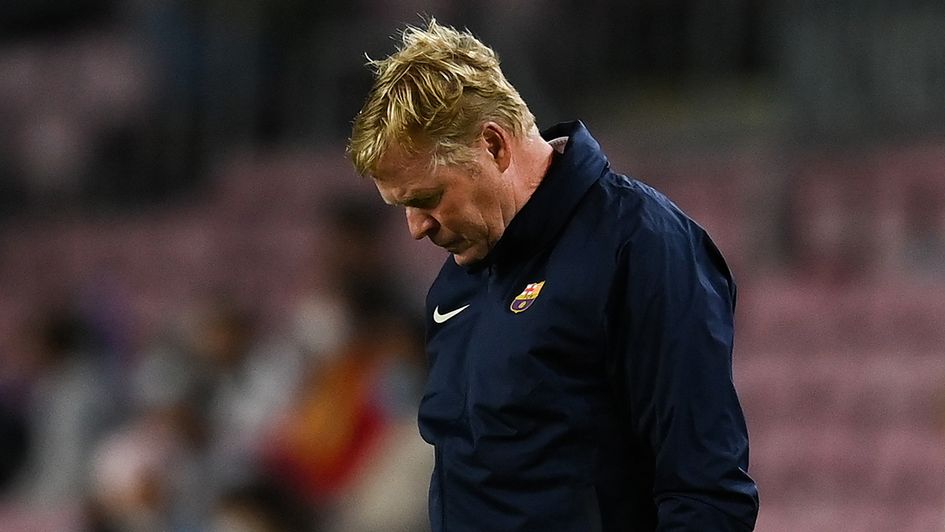 Next Barcelona manager odds: Why sacking Ronald Koeman is not the solution

A second successive Champions League defeat, this time at the the hands of Benfica, plunged Barcelona, and Ronald Koeman, further into crisis.

The former Netherlands boss was under intense pressure following the 3-0 loss in Lisbon on Wednesday night, which left Barca bottom of Group E.

There's a reason it is the world's premier club competition. It's a struggle to get results, just ask their bitter rivals Real Madrid, who arguably suffered a far more embarrassing defeat to Moldovan side Sheriff just 24 hours earlier.

That begs the question, is it really fair that Koeman is under such scrutiny?

Koeman was suspended for a crucial trip to La Liga champions Atlético Madrid on Saturday, and despite Joan Laporta’s public vote of confidence ahead of kick-off, it would be no shock if he was never to return to the Barca dugout - especially as Atleti made light work of his side at the Wanda Metropolitano in a routine win.

But given the circumstances, simply blaming Koeman would be a tad harsh.

A new era at Barca

A club of Barcelona's stature will, of course, be under the spotlight when losing by such a wide margin in the Champions League, but there must be some recognition of the mammoth task facing their head coach.

The Dutchman said post-match that there was "no point" in comparing this Barca team to years gone by, and he's absolutely right.

After all, Koeman's at the helm during one of the toughest spells in the club's history. Barca's farcical financial struggles after poor squad composition have been well-documented this summer, exacerbated by the loss of the best player in the world, Lionel Messi, to Paris Saint-Germain.

Perhaps the only barometer we have to the difference between pre and post-Messi Barca is their 3-0 defeat to Bayern Munich (xG: BAR 0.20 - 2.77 BAY), a rather defeated performance that was clearly influenced by an 8-2 loss to the same team in August 2020. 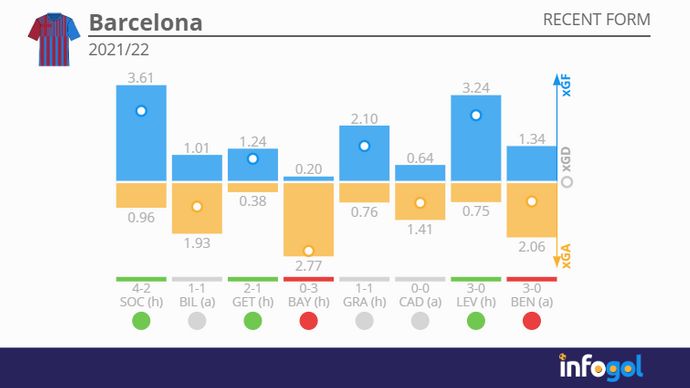 Some promise in La Liga

For all the panic surrounding the Catalan giants, they remain just five points behind La Liga leaders Real Madrid with a game in hand.

Admittedly, three league matches have ended in draws, but there are some early positive signs despite the predicament the previous regime left Barca in.

For instance, their defence is performing at a fairly decent level, allowing an average of 1.03 expected goals against (xGA) per game in the league this season.

Game state has played its part in that, with Barca conceding first in a few fixtures already, but a unit that has yet to be able to field the same four defenders deserves praise.

The emergence of 22-year old Ronald Araújo as a partner for Gerard Piqué has been vitally important considering the financial situation at the club. It's hard to argue against the Uruguayan being their player of the season so far.

Unfortunately, the defender is also arguably Barca's biggest threat in attack this season.

The impact of losing Lionel Messi can't be understated. The little magician contributed to 45% of Barcelona's total xG in La Liga last term, output that is simply impossible to replace with any one player.

Barca's struggles with chance creation in the absence of Messi has, predictably, reared its ugly head away from the Camp Nou. In sharing the points with Athletic Club and Cádiz, they've recorded just 1.01 and 0.64 xG on the road respectively.

At home, Barca have averaged 2.55 expected goals for (xGF) per game.

It may well be harsh that one player might be expected to fill the void that Messi leaves, but that is the mindset of many, and Ansu Fati could be that very player.

Taking up the mantle of the No.10 shirt is a bold move, but we've already witnessed brilliance from the 18-year-old in his short career; a burgeoning one that has been interrupted by a serious knee injury.

After 323 days on the sidelines, Fati made an immediate impact on his belated return in Barca's 3-0 win over Levante last weekend, scoring a screamer just ten minutes after coming on.

Fati's record is already impressive, scoring every 137 minutes on average in the Champions League and La Liga, but even more impressive is Fati's conversion rate, scoring 14 times from 62 shots totalling 7.8 xG in those same games. 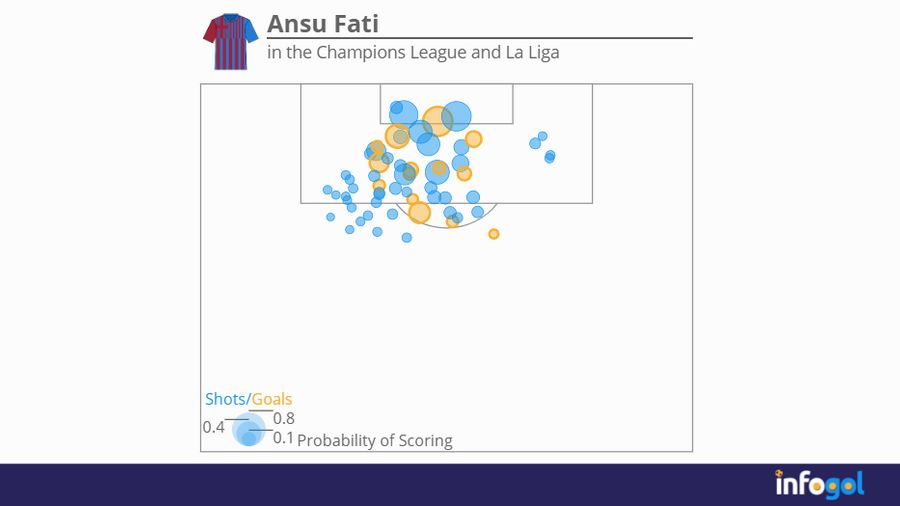 Despite his tender age, his return is a huge boost to whomever will be in charge.

Fati's infectious optimism might be tempered quickly, though, claiming Barcelona can "fight for the league and the Champions League" after the Levante game.

Should Ronald Koeman be sacked?

Koeman has done the opposite to his teenage star, imploring everyone to remain "realistic" considering the situation at the club.

It's a fair point, too. If a club is thought to be in the midst of a crisis, which Barcelona most certainly are, then expectations shouldn't remain the same as they were pre-crisis.

Alas, football is far from a forgiving sport. Koeman is the convenient scapegoat for Barca's failures, but the troubles run much deeper than the man in charge on matchday.

Defeat to Atléti in Madrid on Saturday night may still have signalled the end for Koeman in his dream job. Forced to watch from the stands, perhaps wondering what more he could have done with the task handed to him.

Should his time be up, maybe he will find solace in knowing his replacement will face exactly the same problems. 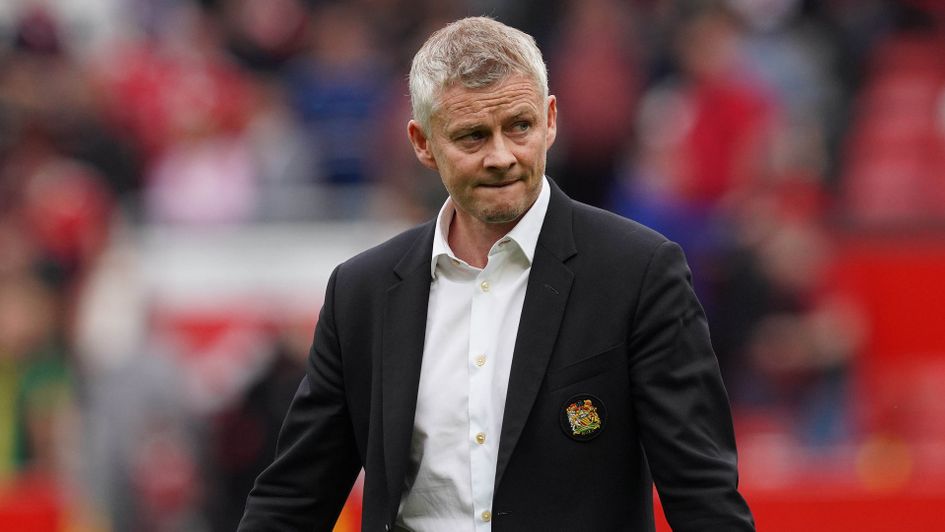