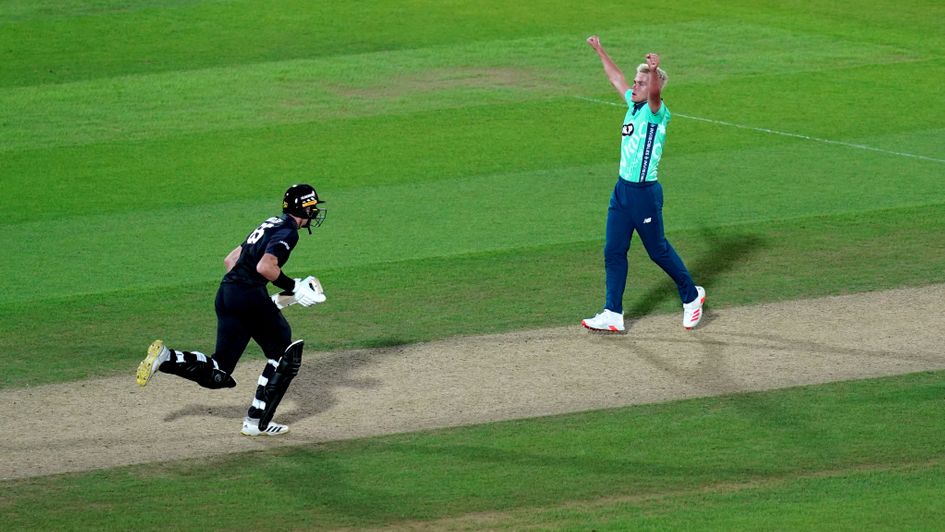 The Hundred: Oval Invincibles edge past Manchester Originals in another thriller

Oval Invincibles claimed a nine-run victory over Manchester Originals in another close encounter to make it back-to-back nights of excitement for The Hundred.

Carlos Brathwaite almost guided the visitors to a successful chase but was out for 37 as the Originals could only close on 135 for seven in front of 18,126 at the Kia Oval.

It was in response to the Invincibles’ 145 for eight, which was led by captain Sam Billings as he top-scored with 49 before he was one of three wickets to fall to Holland international Fred Klaassen.

England internationals Sam and Tom Curran and Reece Topley then all played a part with the ball to ensure the hosts followed their women’s team by winning at the Kia Oval.

After a successful opening night where the women produced a thriller for the 7,395 in attendance and for a TV audience which peaked at 1.95million, it was over to the men.

Originals captain Jos Buttler decided to bowl first after calling correctly at the toss, with the England international only able to feature in the first two matches of the 100-ball tournament due to his Test commitments next month.

Buttler threw the ball to Tom Hartley, even though the off-spinner had to wait until last August to make his professional debut, but he delivered by removing both openers Sam Curran and Jason Roy.

At 48 for four, the hosts needed a partnership and Billings led the fightback and dominated a 57-run stand for the fifth wicket with Colin Ingram.

Billings helped wrestle back the momentum with two maximums off spinners Matt Parkinson and Callum Harrison, but two wickets in three balls for Steven Finn again put the Oval-based side under pressure.

The older Curran brother, Tom, answered the call and added 29 not out to help the Invincibles set a testing target.

After English singer Jack Garratt had entertained a near full-house during the interval, it was back to the cricket and Phil Salt welcomed Sam Curran to the crease with a boundary but the all-rounder had the last laugh three balls later.

Topley ensured Joe Clarke’s flurry of fours was shortlived as the Originals ended the powerplay on 28 for two.

Buttler had been starved of the strike, but also struggled to pick Sunil Narine. The wicketkeeper eventually got the West Indian away to the boundary from his ninth ball with a neat reverse-sweep.

It was not a sign of things to come, however, with the next delivery sent straight down Ingram’s throat.

On the same wicket used by the women 24 hours earlier, it was becoming increasingly difficult to score – and although an 18-ball spell without a boundary was ended by Colin Munro, a second big shot soon after by the New Zealand batter proved his undoing for 26 as Nathan Sowter struck.

While Brathwaite was struggling with his timing, his antics in the 2016 T20 World Cup final were still fresh in the memory and a paddle sweep for four from partner Harrison was a welcome relief as the run-rate increased.

The all-rounder threatened to release the shackles when successive fours were hit off Topley to leave the equation at 58 required off 30 balls.

After Sowter and Narine had kept it tight for a 10-ball spell, Brathwaite lifted the spirits of the Originals with a sumptuous cover drive for six.

Harrison, with a top score in professional cricket of 37, was also playing a role but departed after a four off Sam Curran was followed with revenge served by brother Tom who saw his younger sibling catch the spinner for 23.

Just like a day earlier, it came down to the wire but Brathwaite’s attempt to go big off Sam Curran’s opening ball saw his innings end for 37 with the Originals still needing 19 from four balls.

A no-ball added to the drama but the youngest Curran got the job done to ensure it night two of The Hundred ended the same way as the first – with an Oval Invincibles victory.